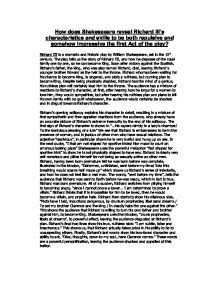 How does Shakespeare reveal Richard III's characteristics and skills to be both repulsive and somehow impressive the first Act of the play?

How does Shakespeare reveal Richard III's characteristics and skills to be both repulsive and somehow impressive the first Act of the play? Richard III is a dramatic and historic play by William Shakespeare, set in the 15th century. The play tells us the story of Richard III, and how he disposes of the royal family one by one, so he can become King. Soon after victory against the Scottish, Richard's father, the king, who was also named Richard, died, leaving Richard's younger brother Edward as the heir to the throne. Richard who has been waiting for his chance to become King, is angered, and plots a ruthless, but cunning plan to become King. Despite being physically disabled, Richard has the mind of a genius, his ruthless plan will certainly lead him to the throne. The audience has a mixture of reactions to Richard's character, at first, after hearing how he longs for a women to love him, they would sympathise, but after hearing his ruthless plan and plans to kill his own family with no guilt whatsoever, the audience would certainly be shocked and in disgust towards Richard's character. Richard's opening soliloquy explains his character in detail, resulting in a mixture of first sympathetic and then appalled reactions from the audience, who already have an accurate picture of Richard's extreme insecurity by the end of his soliloquy. The first sign of Richard's character is shown in "...He capers nimbly in a lady's chamber/ To the lascivious pleasing of a lute" We see that Richard is embarrassed to be in the presence of women, and is jealous of other men who have sexual relations. ...read more.

She uses powerful repetition in the quote: "OH, cursed be the hand that made these holes, cursed the heart that had the heart to do it, cursed the blood that let this blood from hence." This quote makes the task of seduction seem impossible, and our fascination is being increased as we don't see how Richard would be able to succeed. Towards the end of her opening speech, there is dark dramatic irony, where Anne says "If ever he have wife, let her be made more miserable by the death of him." Anne does not know that Richard plans on making her his wife, leaving us sympathising with Anne even more. When Richard enters the room, a fast paced stichomythia begins immediately, showing us Richard's outstanding patience with Anne, even whilst Anne is insulting him harshly. Whilst Anne curses Richard, he replies with only compliments. When Edward's wounds begin to bleed, Anne calls Richard a "lump of foul deformity" and says, "'tis thy presence that exhales this blood" She says the only reason Edward is bleeding is because the killer has entered the room. Her powerful metaphor of disgust makes us seem it is surely impossible to woo someone with so much hatred. When Anne insults Richard with bitter sarcasm: "Oh, wonderful, when devils tell the truth!" he replies back, twisting her remarks flirtatiously, "More wonderful when angels are so angry." Shakespeare uses Richard's power with words to show us how is still light, and Richard may still become successful in his mission to too Anne. The most powerful use of stichomythia is when Anne says Richard is "unfit for any place but hell", and Richard remarks, he is fit for one other place, "Your bedchamber." ...read more.

As Clarence begs for mercy, he drowned in stabbed countless times, then droned in a barrel of wine. Our anger towards Richard increases after seeing this cold blooded murder of his own brother. We realise that Richard truly will not let anyone or anything stop him in his path to becoming King. Despite having great sympathy for Richard at the beginning of the act, as it continued, my sympathy for him went downhill. I have seen Richard as a ruthless murdered and manipulative character who would destroy anything and anyone in his path to the throne, and yet not feel a single bit guilty. In the rest of the play, I can expect to see Richard continuing to destroy anything in his path, but without the need to to act as much. He had succeeded in destroying his brother, the King, and now all he had to do was win over the country, which with his skill with words would not be difficult. I have great sympathy for Richard's victims, all of whom were unsuspecting, and were stabbed in the back, literally and metaphorically. Whilst others may feel Richard had a bad childhood, and was just another person, following a dream, I must disagree. Richard could have fulfilled his mission without using such ruthfulness, without murdering countless unsuspecting people, without creating lies and deceit, spreading rumours, and falsely turning members of the same family against each other. I feel the key strategy used by Shakespeare that has most shaped by reaction to Richard, was Richard's skill with words, the way he could twist anything anyone said, in favour of himself. Without this skill, Richard would not have won countless verbal battles in the Act, which were an important contribution to his path to the throne. ?? ?? ?? ?? ...read more.