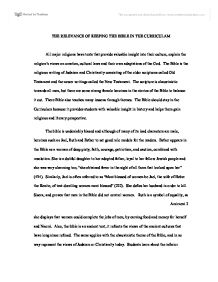 Relevance of the Bible in Classes

THE RELEVANCE OF KEEPING THE BIBLE IN THE CURRICULAM All major religions have texts that provide valuable insight into their culture, explain the religion's views on creation, cultural laws and their own adaptations of the God. The Bible is the religious writing of Judaism and Christianity consisting of the older scriptures called Old Testament and the newer writings called the New Testament. The scripture is chauvinistic towards all men, but there are some strong female heroines in the stories of the Bible to balance it out. There Bible also teaches many lessons through themes. The Bible should stay in the Curriculum because it provides students with valuable insight in history and helps them gain religious and literary perspective. The bible is undeniably biased and although of many of its lead characters are male, heroines such as Jael, Ruth and Esther to set good role models for the readers. Esther appears in the Bible as a woman of deep piety, faith, courage, patriotism, and caution, combined with resolution. ...read more.

God has not spoken to humans for many generations when Noah obediently builds a large, strange boat in preparation for a monumental flood. Abraham similarly dismisses the idols and gods of his region in favor of a belief that an unseen and unnamed deity will provide a promised land for his descendants. Centuries later, the Moses places his trust in the Unseen God, though reluctant at first and carries out all the tasks that God asks of him. Like Noah and Abraham, Moses develops a faith based on his ability to communicate directly with God. Another Important theme in the Bible is Loyalty. Loyalty is depicted in the Old Testament in many different forms from loyalty to the people of Israel to loyalty to a family Amirneni 3 member or neighbor. Heroines, Rahab and Esther both carry out of altruism and courage as they loyally defend the people of Israel. Rahab hides the Israelite spies in her house at the risk of being caught and killed and Esther tactfully talks King Ahasuerus of Persia out of massacring all the Jews living in Persia, at the risk of being dethroned. ...read more.

Characters such as Jalel, David and Samson also restore Israel when invaded by outsiders. Ruth redeems her mother-in-law when they move back to Bethlehem by earning her stay. The Old Testament is well versed with powerful imagery and beautiful messages. It should be taught from a literacy perspective in the English class, and the religious messages in the text should be left for Religion Classes. The Bible is one of the earliest records of history and just like Greek or Roman mythology it can be taught in English classes in the same fashion. The Bible should be kept in the 9th Grade English Curriculum at Ellis because it contains important lessons, which can be learned by the students at Ellis. The book deals with themes such as Loyalty, Forgiveness and Redemption. It also includes strong female characters to counter the chauvinistic theme of the Bible. Its literature is beautiful to read and is a good book for English class. People may argue that the Bible is sacred and belongs in a religion class, but the Bible is also a great literature and can be read in English classes the same way as myths and legends from other cultures are read. ...read more.