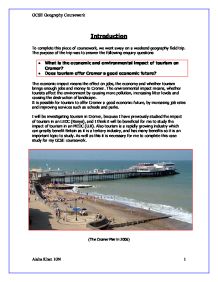 Introduction To complete this piece of coursework, we went away on a weekend geography field trip. The purpose of the trip was to answer the following enquiry questions * What is the economic and environmental impact of tourism on Cromer? * Does tourism offer Cromer a good economic future? The economic impact means the effect on jobs, the economy and whether tourism brings enough jobs and money to Cromer. The environmental impact means, whether tourists affect the environment by causing more pollution, increasing litter levels and causing the destruction of landscape. It is possible for tourism to offer Cromer a good economic future, by increasing job rates and improving services such as schools and parks. I will be investigating tourism in Cromer, because I have previously studied the impact of tourism in an LEDC (Kenya), and I think it will be beneficial for me to study the impact of tourism in an MEDC (U.K). Also tourism is a rapidly growing industry which can greatly benefit Britain as it is a tertiary industry, and has many benefits so it is an important topic to study. As well as this it is necessary for me to complete this case study for my GCSE coursework. (The Cromer Pier in 2006) Sequence of Investigation In this section of the coursework I will describe the sequence of my work and what will be in each different section. Location- In the location I will use four maps at different scales to show the location of Cromer. The maps show Europe, East Anglia, Norfolk and Cromer. I will highlight Cromer on every map and also any roads where I completed my surveys. I will also annotate each map and give a brief description about the location of Cromer. Background Knowledge- In this section I will describe what tourism is and why it is a growing industry. I will use my class notes and secondary data including graphs and statistics to do this. ...read more.

The town has developed ahead of its time, evidence for this is that the hotels and residential areas were built much earlier than in other resorts. But saying this Cromer has no big amusements and not as many hotels today. This is because it is situated in an area of outstanding beauty, which means there cannot be that much development in the town especially if it affects the area. The flow charts help me answer one of the enquiry questions; on tourism offering Cromer a good economic future. From the flow charts, you can see that Cromer has develop much faster than other resorts, but now faces pressure as it can not be further developed and is losing out on a younger generation of tourists so therefore it doesn't have the best economic future compared to other resorts. Fig. 7 Interpretation From the above line graph you can see that 32 of the tourists interviewed, were staying in Cromer for one week. This is because Cromer is hard to reach and there isn't much point staying for just a day. There also isn't many people staying for 2 weeks, this is because Cromer doesn't have as many hotels compared to other resorts or tourist destinations. This line graph can help to answer one of the enquiry questions, as it shows Cromer's need for more hotels and transport links to increase its chances of having a better economic future. Interviews Interview1 Location: Church Person interviewed was an elderly woman in her 60's, she has lived in Cromer for 25 years. 1) "What changes have you seen in Cromer over the years?" "Fewer holidaymakers come to Cromer today, and over time small businesses have closed down. The younger generation move away for better opportunities, my own two boys have moved away, one to Oxford and one to Leeds. 2) "What do you think will happen in the future? ...read more.

I found this data to be quite reliable as the whole class was allocated different part of Cromer to comment on and put our results together. Although this data was reliable, a factor that could've affected it is the time of year, as there may have been more traffic or noise if we visited in August. Interviews I used interviews to find out what tourists and residents think about Cromer and tourism; and this helped me answer my enquiry questions. I found this method both partly reliable and unreliable. It was reliable as I was getting opinions on specific information, but it was also unreliable as they were only opinions and not necessarily facts. I would improve this method, by using statistics to back up the opinions in my interviews. Photographs I used photos that I took in Cromer to show things such as the environment and tourist directed shops. My photos were reliable as they were what you could see, but again they may have been affected by the time of year that we visited. For example if we were to visit in a more tourist seasonal month there may be a higher amount of litter. Business Dependency Survey I used the business dependency survey to show whether there are shops in Cromer that are tourist dependent. I think this method was reliable as I was only counting the shops I saw and there weren't really any factors that would've affected my data collection. Glossary LEDC: Less economically developed country. MEDC: More economically developed country. PRIMARY INDUSTRY: Primary industry jobs are usually low paid and low skilled. They include mining, lumbering and agriculture. SECONDARY INDUSTRY: Secondary industry jobs involve working in factories. TERTIARY INDUSTRY: Tertiary industry jobs mean jobs that provide a service, and require more skills and are usually higher better paid e.g. teacher, doctor. ECONOMICALLY ACTIVE: The age range that can work and earn money. ELDERLY DEPENDENT: The age range that usually have to rely on the economically active. ?? ?? ?? ?? GCSE Geography Coursework 1 Aisha Khan 10N ...read more.