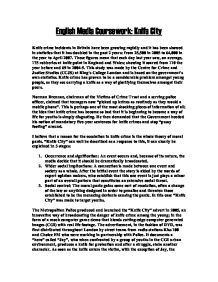 English Media Coursework: Knife City Knife crime incidents in Britain have been growing rapidly and it has been showed in statistics that it has doubled in the past 2 years: from 25,500 in 2005 to 64,000 in the year to April 2007. These figures mean that each day last year saw, on average, 175 robberies at knife point in England and Wales; showing it soared from 110 the year before and 69 in 2004-5. This study was made by the Centre for Crime and Justice Studies (CCJS) at King's College London and is based on the government's own statistics. Knife crime has proven to be a considerable problem amongst young people, as they see carrying a knife as a way of glorifying themselves amongst their peers. Norman Brennan, chairman of the Victims of Crime Trust and a serving police officer, claimed that teenagers now "picked up knives as routinely as they would a mobile phone". This is perhaps one of the most shocking pieces of information of all; the idea that knife crime has become so bad that it is beginning to become a way of life for youths is simply disgusting. He then demanded that the Government heeded his notion of mandatory five-year sentences for knife crimes and stop "pussy footing" around. I believe that a reason for the escalation in knife crime is the whole theory of moral panic. "Knife City" can well be described as a response to this, it can clearly be explained in 3 stages: 1. Occurrence and signification: An event occurs and, because of its nature, the media decide that it should be dramatically broadcasted. 2. Wider social implications: A connection is made between one event and society as a whole. After the initial event the story is aided by the words of expert opinion makers, who establish that this one event is just plays a minor part of an overall pattern that constitutes an extensive social threat. ...read more.

very serious matter that needs to be dealt with, the camera angles reflect this, as there are many eye level angle shots that involve us with the scenes successfully. Camera movement is used in "Knife City" to express the mood of what is happening at that moment. Such as after the stabbing has taken place and the police arrive, the camera pans and shakes quite violently; demonstrating the whole feeling of panic, it is apparent that there is a lot of activity and the shaking makes it seem like we are hesitating; not knowing whether to run and seek a place to hide or to stay, possibly out of shock, this seems to replicate the viewer's feelings as they themselves are shocked by what has happened. The jerky movements allow us to only get a general idea of what is going on; we see that there is a woman crying over the victim and we can assume that this is his mother, this helps to indicate that others are effected, and severely. The police arrest our "hero", yet he is still in CGI and doesn't seem like a hero anymore whatsoever; the consequences here haven't yet sunk in to Jay, showing that he has not yet come to terms with what he has done, and the audience may not have either. He still has his hood up and cap on; this shows that he believes that this still glorifies his image yet the audience is slowly coming to terms with the fact that this has become very serious and, unlike a game, he will not be able to start again, it also enforces the fact that you cannot hide from the law, whereas in a game it may be easy to escape consequences. Camera movement is also well used to put the message of "Knife City" across. An example of this is the closing shot where we see the now real life face of Jay, through a cell window. ...read more.

The change from CGI to filmed footage is the most effective aspect of "Knife City", as this is where the shock of the situation takes place, due to the unexpectedness of the change, here we are made to realise that the consequences of knife crime are very real, creating a big impact on many other peoples' lives, such as the woman crying, despite the change, Jay stays in CGI and as we are already receiving the message of knife crime is "not a game", we begin to think of him as a fool for his actions. "Knife City" is far more effective than "GTA", as we are kept constantly on edge, mainly by the use of the non-diegetic sound, which keeps us intrigued as to what will happen next. Whereas in "GTA", we are made to feel relaxed and at ease with the violence and crime that is on show, making us look upon it in an almost positive way, this doesn't keep us excited as in "Knife City" The Metropolitan Police's idea of "Knife City" was a very intelligent one, however I can't help but feel that something a lot more dramatic would be more successful in reaching young people's minds. Also, the sort of teenagers who are more likely to carry a knife are probably much more inclined to spend their time on the streets with peers rather than playing on video games, therefore "Knife City" wouldn't have the completely correct idea. Furthermore, despite the strategic handouts of faux video games to youths throughout London, I feel that broadcasting "Knife City" on TV at an appropriate time would have a much larger impact, as it would reach a wider audience who would be repeatedly exposed to its persuasive appeal. If I was to tackle the issue of knife crime I would do these things, also, I believe that distributing the pain caused in families more effectively by its victims would be necessary in order to sway youths minds, who would never want to cause such grief, especially not among their own family. ...read more.