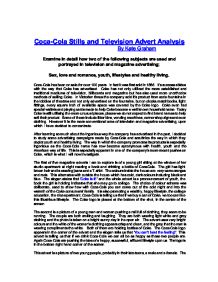 Examine in detail how two of the following subjects are used and portrayed in television and magazine advertising; Sex, love and romance, youth, lifestyles and healthy living.

Coca-Cola Stills and Television Advert Analysis By Kate Graham Examine in detail how two of the following subjects are used and portrayed in television and magazine advertising; Sex, love and romance, youth, lifestyles and healthy living. Coca-Cola has been on sale for over 100 years. In fact it was first sold in 1886. It's success abides with the way that Coke has advertised. Coke has not only utilized the more established and traditional mediums of television, billboards and magazine but has also used more unorthodox methods of selling Coke. In Victorian times the company sold it's product from soda fountains in the lobbies of theatres and not only advertised on the fountains, but on clocks, matchbooks, light fittings, every square inch of available space was covered by the Coke logo. Coke even had special wallets and playing cards made to help Coke become a well known household name. Today Coke is still utilising the more unusual places, places we do not expect to find brand names to help sell their product. Some of these include litter bins, vending machines, corner shop signs and even clothing. However it is the more conventional area of television and magazine advertising, upon which I have decided to concentrate. After learning so much about the ingenious way the company has advertised in the past, I decided to study some advertising campaigns made by Coca-Cola and scrutinize the way in which they depict youth and healthy living. ...read more.

Once again the 'You can't beat the feeling!' slogan is visible at the bottom of the page. The boy is in a football stadium with a huge football painted on the building directly behind his head. This advert is used to show how all nationalities can play football and Coca-Cola supports each and everyone. This image is obviously promoting a vision of healthy living and energy. Coca-Cola is sporty! Again the Coke logo is placed in the bottom right hand corner of the screen. Now as I come to marvel at the simplicity and effectiveness of Coca-Cola's television advertising and look in detail at ten particular shots from this advert I have already noticed a pattern in the company's marketing strategy. I have discovered that in advertisements, Coke entices and coerces you not only to choose their cola, but to make a lifestyle choice. They encourage you to choose the young, affluent, athletic lifestyle they deceptively persuade you into thinking you can get from a bottle of their cola, rather than anybody else's. I will now look at the television commercial for the same cleverly created images of the Coca-Cola lifestyle. The ad for Coke I observed consisted of twenty five shots, all very carefully scripted and produced. The sound track is loud, energetic and the beat is very fast. After watching the advert all the way through I felt refreshed and energised. ...read more.

Coca cola have ingeniously placed a parasol with red and white stripes, very similar to the stripes of the American flag, in the corner of the rest room to show that Coca-Cola is a patriotic drink and as much a part of America as the president himself. In this shot Coca-Cola have decided to promote sex and the American dream to help them sell their product. This, the final shot is of a young woman with blonde hair, against a white background. The woman has a huge smile and the caption underneath her reads 'You can't beat the feeling!'. This suggests that if you drink Coke you will be happy too. The Coca-Cola trademark features at the bottom of the screen just to remind us of the product we are being sold. After I have looked at both the magazine and television adverts, I have come to the conclusion that Coke does not only stress images of youthful energy and health to convince us to buy their merchandise, but also a more timeless appeal. Young and old images coexist in harmony and make sure that Coke is for all, whatever the age. The company has cleverly shown us images of youth, love and romance, healthy living, sex and the images of several favourable lifestyles, (college education, a life of abundance but not extravagance) and also managed to link Coca-Cola with all aspects of America as well as the rest of it's global community, making it the world's number one selling soft drink. ...read more.