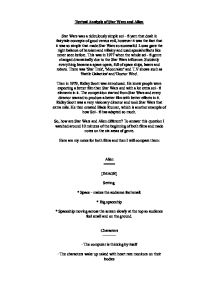 Textual Analysis of Star Wars and Alien Star Wars was a ridiculously simple sci - fi yarn that dealt in fairytale concepts of good versus evil, however it was the fact that it was so simple that made Star Wars so successful. Lucas gave the right balance of heroism and villainy and used special effects like never seen before. This was in 1977 when the whole sci - fi genre changed dramatically due to the Star Wars influence. Suddenly everything became a space opera, full of space ships, lasers and robots. There was 'Star Trek', 'Moonraker' and T.V shows such as 'Battle Galactica' and 'Doctor Who'. Then in 1979, Ridley Scott was introduced. He knew people were expecting a better film than Star Wars and with a lot extra sci - fi elements in it. The competition started from Star Wars and every director wanted to produce a better film with better effects in it. Ridley Scott was a very visionary director and took Star Wars that extra mile. He then created Blade Runner, which is another example of how Sci - fi has adapted so much. ...read more.

* All white - makes everything seem clinical (like a hospital) * Flashing lights. * Dark with pure white light. * Black * Panning camera - backwards - as if we are scared - smooth moving cameras. * Quick edits to make it seem like everything has come alive. Style Star Wars [IMAGE] These two films have many similarities; these are because of the narrative theme boundaries. Every genre has different narrative themes, but can be cross-referenced with one another because the boundaries tie together. Certain things are the same in two themes but mean different things. In 'Alien' the spaceship comes into view of the audience and fills the screen to show the size of it compared to space, the size of it makes the audience feel small. The same thing happens in Star Wars, which shows the conventions that Lucas gave this theme were very successful and the audience liked them. The white lighting and angular shape of the interior of the ships show the modern style that needs to be portrayed for the audience to understand the genre because they represent future. ...read more.

The characters in the two films are very different but there are some similarities. The crew on the 'Alien' ship are all humans and are normally in casual clothing with badges on their arm to show they are in uniform to show that they are working together and are all the same. In 'Star Wars' there are some human being characters, but most of the characters are robots or humans in costume being represented as robotic beings. There are the same character types in each film. The two films are both Space Fantasies, but different types, 'Star Wars' is a battle and 'Alien' is an Alien Invasion. The opening of 'Star Wars' opens like a fairy tale telling us the story first of all so the audience already know some of the story so the film doesn't have to go back in time. In the opening of 'Alien' you see five rectangle shape silver lights in front of a planet, coming up one by one giving the impression there is a spaceship in space. More rectangles are added slowly to make the word Alien. ...read more.