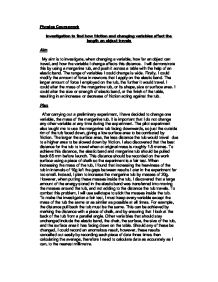 Investigation to find how friction and changing variables affect the length an object travels.

My aim is to investigate, when changing a variable, how far an object can travel, and how the variable I change affects this distance. I will demonstrate this by using a margarine tub, and push it across a table with the help of an elastic band. The range of variables I could change is wide. Firstly, I could modify the amount of force in newtons that I apply on the elastic band. The larger amount of force I employed on the tub, the further it would travel. I could alter the mass of the margarine tub, or its shape, size or surface area. I could alter the size or strength of elastic band, or the finish of the table, resulting in an increase or decrease of friction acting against the tub.

After carrying out a preliminary experiment, I have decided to change one variable, the mass of the margarine tub. It is important that I do not change any other variable at any time during the experiment. The pilot experiment also taught me to use the margarine tub facing downwards, so just the outside rim of the tub faced down, giving a low surface area to be combated by friction.

Here is a diagram of the full set of apparatus and how it will be structured:

The evidence obtained, mostly very accurate, included one certainly anomalous result, and another narrowly inaccurate. The procedure used in the investigation was obviously successful in the majority, yet I could have controlled the investigation more accurately be making sure not to change any other variables at all. The main factor for the inaccuracy of some of the results was probably that I did not always look at the tub in parallel when releasing it. The accuracy could have been improved by doing this, and also by taking the results 5 times then recording an average result. I could have used larger changes in masses to highlight more distinctive intervals in distance the tub travels, making it easier to pinpoint anomalous results. The evidence is, however, sufficient to support a conclusion, as only one or two results did not fit the trend, in this case, the curve. The possibility of anomalous results was a factor leading me to take 7 results. Improvements to provide additional evidence for the conclusion could be to change the variable altered in the experiment, for example, I could use a Newton meter to change the force acting upon the tub when released, acting as an extra aspect of evidence to add to the conclusion.