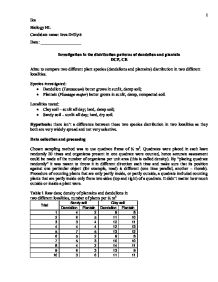 Ika Biology HL Candidate name: Ieva Drulyte Date: ___________________ Investigation in the distribution patterns of dandelion and plantain DCP, CE Aim: to compare two different plant species (dandelions and plantains) distribution in two different localities. Species investigated: * Dandelion (Taraxacum) better grows in sunlit, damp soil; * Plantain (Plantago major) better grows in sunlit, damp, compacted soil. Localities tested: * Clay soil - sunlit all day; hard, damp soil; * Sandy soil - sunlit all day; hard, dry soil. Hypothesis: there isn't a difference between these two species distribution in two localities as they both are very widely spread and not very selective. Data collection and processing Chosen sampling method was to use quadrate frame of 1/4 m2. Quadrates were placed in each lawn randomly 20 times and organisms present in one quadrate were counted, hence accurate assessment could be made of the number of organisms per unit area (this is called density). By "placing quadrate randomly" it was meant to throw it in different direction each time and make sure that its position against one particular object (for example, road) ...read more.

To obtain more reliable results, more trials should have been done as well as more localities should have been investigated. ? between dandelions and plantains in sandy soil: 4,55 - 3,6 = 0,95 ? between dandelions and plantains in clay soil: 11,65 - 10,2 = 1,45 If compared only arithmetical means of two populations, they seem to be quite small, however, to make more meaningful comparison between two populations, further comparison between SD's and difference in means should be done: SDs in sandy soil are 1,6 and 1,2 � they are bigger than 0,95; SDs in clay soil are 1,63 and 1,6 � they are bigger than 1,45. The value of calculating standart deviation SDs can be used to help to decide whether the differences between the two related means (such as population of dandelions and plantains in same localities) are significant or not. Comparison between difference in means and SDs show that differences between average means are not significant as SDs are larger than the difference between means. ...read more.

A human error could also have altered the results - sometimes it is too difficult to find the real number of organisms within the quadrate as some of the are hidden under higher neighbors or some are even to small to be noticed. Population depends not only on humidity of a soil and light intensity, there are such factors as people activity, pollution, characteristics of soil and even near-growing plants. Hence, characterizing the lawn more precisely would let make more accurate conclusions. There may be even unknown factors that have an effect on populations, therefore, more lawns and fields of similar features should be tested in order to obtain more reliable results. One more factor that may have changed the recordings is the time of a season. Generalizations that two popularities are quite similar could be erroneous as I fulfilled an experiment at a particular time and did not take into the account that maybe after a period of a few months one of the populations will have been grew into 3 times larger. For more precise results trials should be taken at least every week for a period of a month. ?? ?? ?? ?? 1 1 ...read more.