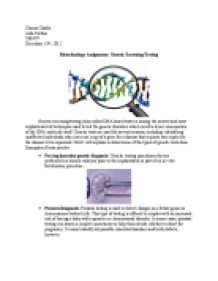 ﻿Cherno Okafor Aida Stefani SBI4U7 December 13th, 2012 Biotechnology Assignment: Genetic Screening/Testing Genetic screening/testing (also called DNA-based tests) is among the newest and most sophisticated of techniques used to test for genetic disorders which involve direct examination of the DNA molecule itself. Genetic tests are used for several reasons, including: identifying unaffected individuals who carry one copy of a gene for a disease that requires two copies for the disease to be expressed. Now I will explain in detail some of the types of genetic tests done. Examples of tests involve: 1. Pre-implantation genetic diagnosis: Genetic testing procedures that are performed on human embryos prior to the implantation as part of an in vitro fertilization procedure. 1. Prenatal diagnosis: Prenatal testing is used to detect changes in a fetus's genes or chromosomes before birth. This type of testing is offered to couples with an increased risk of having a baby with a genetic or chromosomal disorder. In some cases, prenatal testing can lessen a couple's uncertainty or help them decide whether to abort the pregnancy. It cannot identify all possible inherited disorders and birth defects, however. 1. Newborn screening: A health program that identifies treatable genetic disorders in newborn infants). Early intervention to treat these disorders can eliminate or reduce symptoms that might otherwise cause a lifetime of disability. 1. Genealogical DNA test: For genetic genealogy purposes. 2. Pre-symptomatic testing: For predicting or estimating risks of developing certain diseases such as Huntington?s or Alzheimer?s, 3. ...read more.

There is precedent for defining deviations from the statistical norm, such as high blood pressure or obesity, as "disease." However it is appropriate to ask if a late onset condition is a disease. When the full human genome -- the collective name for all human genes -- is mapped, we risk greatly expanding the numbers of people who do not fit our definitions of normal, able, and healthy. The significance of the debate about what constitutes a disease is underscored by the two broad questions which underlay the current debate: Who decides whether or not testing is done; and what happens to that information? Clearly genetic screening is going to be done. The question is how are we going to use it and what social limit will we put on it? There is an apparent discrepancy between the reality of genetic variability and the democratic ideal that all citizens are "created equal." Possible outcomes of genetic screening experts see are: 1. Genetic discrimination: People with genetic flaws, not all of which show up as dysfunctions, may be denied life insurance, health insurance, and access to schooling or to jobs. 2. Differential treatment: Employers could hire only those people whose genes indicate that they are resistant to the health hazards of the work place, which is a cheaper alternative to making the work place safe for all. 3. Eugenics: Social or political pressure may be applied to people to make childbearing decisions on the basis of genetic information. ...read more.

While genetic testing/screening has its benefits, it also has its disadvantages. There are two good arguments that go against genetic screening. Some feel that genetic screening would lead to discrimination of those individuals, which possess "inferior" genes. Second, people fear that genetic screening will lead to reproductive decisions being based on the genetics of their child. Discrimination is a very real prospect, now that humans posses the technology to analyze genetic contents. As discussed previously, insurance companies and employers would like to be able to determine insurance rates and employment statuses based on the genetic composition of people. Individuals may be prevented from obtaining insurance due to a high risk factor for a certain disease. Many people fear that genetic screening will change the way humans reproduce. Instead of allowing reproduction to occur naturally, people could use fetal and embryonic genetic screening in order to select for a better child. Many people would be messing with God?s creation and nature, and that humans are not meant to do this. Secondly, abortion also becomes an issue, because if the parents of an unborn child find out that their child has a certain genetic defect, they may decide to end the pregnancy. In addition, some religions consider any interference with the natural act of reproduction to be immoral. Thirdly, what would happen to individuals who were carriers for genetic abnormalities? Would they be encouraged not to reproduce? In this situation it seems as though the individual would be better off not knowing about their condition. ...read more.