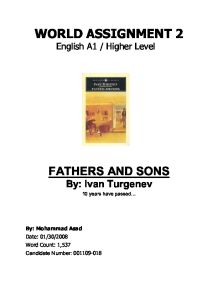 WORLD ASSIGNMENT 2 English A1 / Higher Level FATHERS AND SONS By: Ivan Turgenev 10 years have passed... By: Mohammad Asad Date: 01/30/2008 Word Count: 1,537 Candidate Number: 001109-018 Statement of Intent Ten years have passed since the brothers last met. It was then when in the small parish church, two weddings had taken place quietly and almost without witnesses: Arkady's wedding to Katya and that of Nikolai Petrovich to Fenichka; and on that same day, Nikolai Petrovich was giving a farewell dinner for his brother, who was going away to Moscow on some business. I have decided to continue and add to the novel Fathers and Sons ever since I finished reading it. I always wondered where each character would be after a certain period of time. And now I will remind you of the characters, and where we last left them with Turgenev, so we can carry on from there: The Kirsanovs, father and son, had settled at Maryino. Arkady was passionately engrossed in the management of the estate and the farm was yielding a fairly substantial income. Nikolai Petrovich became an arbitrator in the land reforms and was putting all of his energy into the work. ...read more.

It was that day, when this beautiful young lady joined us. The owner introduced her to us and to our surprise began telling her what her job was. Everyone was surprised as it seemed like she was from an upper class in the society and was not required to engage herself in a job of this sort. But later on we all found out that she was relatively poor, but that did not matter, because she was really gorgeous. The estate was large; therefore the workers were divided into groups. Lucky me, she worked in my group. From the first day I saw her, I was fascinated. She was the loveliest female I had ever seen. Day by day, I became fond of her and wanted to confront her with my feelings, but I was afraid. She seemed to be too good for me and I didn't want to get rejected. As a couple of months passed by, I decided to express my feelings toward her. As the sun set, everyone was getting ready to go home. As we exited the farm, I approached her. She did not seem surprised as if she new my feelings toward her. ...read more.

At one of his meetings with his fellow visitors, he meets this Russian female. Like Nikolai's experience, he too became fond of this lady. Unlike Nikolai though, he expresses his feelings directly from the first time, after that tragically sad love affair he went through. After speaking to the lady, he knows exactly that she is the right one, and so he asks her hand in marriage. Surprisingly, she accepts. It turns out to be that she also has come out of a tragically sad love affair and longs for a companion. They get married and decide to make a journey around the world. They start their journey from Moscow and happily decide to end it at Nikolai's estate. Once again, just like it was ten years before, the brothers meet again. The family has reunited and they all sit for lunch. At the dinner table, everyone exchanges the experiences they faced in those ten years that passed. When they finish, Nikolai stands up and claims: "On behalf of this household, I hereby exclaim that my brother Pavel Petrovich, along with his lovely wife, is welcomed back to live with us in this home". Pavel delightfully accepts the invitation and so the three families: Arkady and Katya, Nikolai and Fenichka, and Pavel and his wife, are all living happily together under one roof. ...read more.