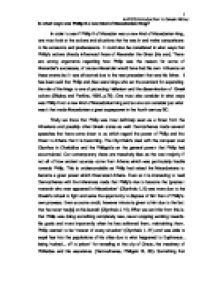 In what ways was Philip II a new kind of Macedonian King?

In what ways was Philip II a new kind of Macedonian King? In order to see if Philip II of Macedon was a new kind of Macedonian king, one must look at the actions and situations that he was in and make comparisons to his ancestors and predecessors. It could also be considered in what ways that Philip's actions directly influenced those of Alexander the Great (his son). There are strong arguments regarding how Philip was the reason for some of Alexander's successes, of course Alexander would have had his own influence on these events but it was all started due to the new precedent that was his father. It has been said that Philip and Alex were kings who set the standard for expanding the role of the kings to one of protecting Hellenism and the dissemination of Greek culture (Shipley and Parkins, 1998, p.78). One must also consider in what ways was Philip II not a new kind of Macedonian king and so one can consider just what was it that made Macedonian a great superpower in the fourth century BC. Firstly we know that Philip was most definitely seen as a threat from the Athenians and possibly other Greek states as well. Demosthenes made several speeches that have come down to us which regard the power of Philip and the threat to Athens that it is becoming. The Olynthaic's deal with the conquest over Olynthus in Chalcidice and the Philippic's on the general power that Philip had accumulated. ...read more.

Even if he did not do as many military reforms as might liked to be believed, he was the Macedonian king who realised that the army could be used in order to affirm his power; 'the vital elements were already there, the realisation of their potential was his achievement' (Ellis,1976, p.9). He did make all of the cavalry and the foot soldiers his Companions. This was a fundamental move in ridding himself of the possibility of regional kings defecting with the troops to suit their [the regional kings'] motives and ambitions (Cawkwell, 1978, p.38), before it had just been the cavalry who were the kings' companions. Furthermore he did not rest in the winter and campaign just in the summer (Demosthenes, Philippic III, 50). Instead he would campaign constantly and so enemy states had no real time to rest from his attacks. The army were used constantly and were his companions, they had effectively become the state like him (Ellis,1976, p.231). The kings during the Athenian Empire greatest height struggled 'to keep them at arms length' and this was repeated again when the Spartans became the dominant force within the Greek world (Cawkwell, 1978, p.23). The fact that Philip was able to turn these tables around so that it was the Greek states that would struggle to keep Macedon at arms length is testament to his abilities as a king and shows just what the changes that he brought about could achieve. Macedon could now easily intervene where it saw fit, unlike in the fifth century when it simply was not strong enough to enter neighbouring Thessaly (Cawkwell, 1978, pp.20-5). ...read more.

Philip's forces were strong and large enough to allow him to police the Macedonian plains against any marauders as well as giving him the man power to carry out his military plans (Cawkwell, 1978, p.81). Propaganda needed by Macedonian kings to do with the reason for the Persian invasion so that they had the 'status in relation to the Greek world' (Austin, 1993, p.201). Philip was in some ways a new kind of Macedonian king and in others very much a product of the Macedonian lineage. He was able to unite Macedon under the one banner and to make it a truly united kingdom, something his predecessors seemed unable to do or to keep as. Philip retained the aspects of kingship that were expected of him and in these ways he was not a new kind of Macedonian king, he remained the chief judge and priest and was the protector of the people. However how he did this last point is where he begins to become the new kind of king. He expanded the territory of Macedon and finished the developments to the army that led to them becoming the dominant force in Greece and the Mediterranean. Even if these reforms had been begun by past kings, it was Philip who had disciplined the troops to constantly train. It was Philip who had the ideas for expansion after his defence of the territory that had always been weak. He made it strong and made Macedon a central power which would be powerful for decades to come with fine commanders due to his education system. Overall Philip was the precedent for what Alexander the Great would go on to achieve. ...read more.