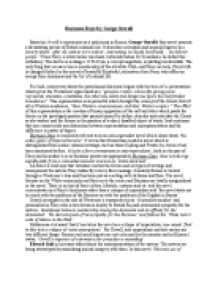 ﻿Burmese Days by Gorge Orwell Based on Orwell?s experiences as a policeman in Burma, George Orwell's first novel presents a devastating picture of British colonial rule. It describes corruption and imperial bigotry in a society where, 'after all, natives were natives - interesting, no doubt, but finally ... an inferior people'. When Flory, a white timber merchant, befriends Indian Dr Veraswami, he defies this orthodoxy. The doctor is in danger: U Po Kyin, a corrupt magistrate, is plotting his downfall. The only thing that can save him is membership of the all-white Club, and Flory can help. Flory's life is changed further by the arrival of beautiful Elizabeth Lackersteen from Paris, who offers an escape from loneliness and the 'lie' of colonial life. For Said, controversy about the postcolonial discourse begins with the term of re-presentation which gives the Westerners upper-hand as a ?genuine creator, whose life-giving power represents, animates, constitutes, the otherwise silent and dangerous space beyond familiar boundaries? .This representation is so powerful which brought the concept of the Orient, first of all in Western academics, ?then Western consciousness, and later Western empire.? The effect of this representation is the creation of binary opposition of the self and other which posits the former in the privileged position that permits himself to define, describe and articulate the Orient as she wishes, and the former in the position of a silent, disabled object of study. Said continues that one cannot make any distinction between representation and misrepresentation and the difference is matter of degree. Burmese Days is commonly referred to as an anti-imperialist novel which closes down ?the entire genre of imperial heroics?. ...read more.

bullock-cart drivers seldom grease their axles, probably because they believe that the screaming keeps away evil spirits? ; as the medicine, they eat and drink ?herbs gathered under the new moon, tigers whiskers, rhinoceros horn, urine, menstrual blood!? And finally Weiksa or magician who distributes magic bullet-proof jackets. Edward Said points out that Oreint is always seen as mysterious and a muddle for the Occidents. Burma is an exotic place for Westerners and Orientals, strangeness and exoticism generate from that exotic locale. Elizabeth is terrified by this ?strangeness?, as Adela in ?A Passage to India? did. Accordingly, the bushes are foreign-looking, rhythms of the tropical seasons and hollow cries are strange ; Eliza among the natives? spectacle wishes to escape from this strange place to familiar one, i.e. the Club and she always barked at strange Orientals Ko S?la is an ?obscure martyrs of bigamy? and Li Yeik, the Chinese shopkeeper had two girls as his concubines. In short, in Burmese Days like other colonial novels, a web of colonial images and cultural stereotypes are attributed to the Burmese which fix them in their inferior position. Elizabeth as a memsahib is also bigoted and she felt ?the hatefulness of being kin to creatures with black faces? .Eliza?s overt racism is also shown in two occasions: when Flory, assuming that ?she was different from that herd of fools at the Club? and she will appreciate native?s culture, took her to a pwe, a kind of Burmese play. Another occasion was when they paid a visit to bazaar. At first she is shocked when she sees how they have blocked the road for their performance, and Flory answers that ?there are no traffic regulations here. ...read more.

Their faces are hidden behind the masks and their faces grow to them. This mask is ‘civilizing mission’, a slimy lie that undergoes to uplift their black brothers. Flory’s suicide displays a deep pessimism about the relationship of the natives and non-natives. Flory as the protagonist not only can erase this dividing line between the Anglo-Indians and Burmese, but also by his duplicity and cowardice and devotion to pukka sahib beatitudes make this line clear and visible. On the other hand, the natives such as U Po Kyin, Dr.Veraswami, and Ma Hla May, among others are in the unprivileged positions. Ma Hla May is double colonized by Flory as a male and as an agent of the empire. Dr. Veraswami or as Ellis calls him Dr. very-slimy is a mouthful of the British Empire and in spite of his adoration for her, demotes at the end. U Po Kyin is a typical Oriental, though cunning but quite barbaric. He believes that end justifies the means and for gaining his goal i.e. to become a club’s member, he does the most vicious deeds. Because of the imaginary line between these two poles, some stereotypes and clichés are attributed to the Orientals such as cunning, treachery, lethargy, mendacity, superstition, etc. They are reduced to the level of objects and animals. As a result, the representation of the Self and the Other in “Burmese Days” and designation of some stereotypes and clichés to the Orientals follow Said’s model which is elaborated in his Orientalism. As Said himself alleges, one cannot get around this binary opposition and others like it and pretends that they do not exist. Therefore, we cannot disregard the Orientalist distinction between ‘us’ and ‘them’. ...read more.