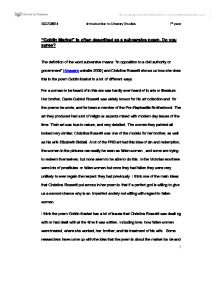 Christina Rossetti's Goblin Market is often described as a subversive poem. Do you agree?

"Goblin Market" is often described as a subversive poem. Do you agree? The definition of the word subversive means "in opposition to a civil authority or government" (Answers website 2009) and Christina Rossetti shows us how she does this in the poem Goblin Market in a lot of different ways. For a woman to be heard of in this era was hardly ever heard of in arts or literature. Her brother, Dante Gabriel Rossetti was widely known for his art collection and for the poems he wrote, and for been a member of the Pre-Raphaelite Brotherhood. The art they produced had a lot of religious aspects mixed with modern day issues of the time. Their art was true to nature, and very detailed. The women they painted all looked very similar; Christina Rossetti was one of the models for her brother, as well as his wife Elizabeth Siddall. A lot of the PRB art had this idea of sin and redemption, the women in the pictures can easily be seen as fallen women, and some are trying to redeem themselves; but none seem to be able to do this. In the Victorian era there were lots of prostitutes or fallen women but once they had fallen they were very unlikely to ever regain the respect they had previously. ...read more.

Specifically, gold hair in Victorian society represented innocence. The single tear Laura sheds betrays her knowledge that she is literally selling herself in order to experience the fruit" (Victorian Web Website 2008)Therefore when Rossetti decides that her character is redeemed, later in the poem and goes on to have a husband and children this would be seen as very subversive. As women would never in this era be redeemed by society as "sexual pleasure was forbidden to Victorian women" (Victorian Web Website 2009) What I think Rossetti is trying to say here is that prostitution is bad, but once the women have learnt that and redeemed herself that she should then not be judged as a bad person; that she should gain her respectability back. Like "D Amico suggests that Rossetti did not see much difference between the woman who sells herself in marriage, who does not marry for genuine love, and a woman who has sexual experience before marriage because she is fooled by the promises of human love". (Victorian Web Website 2009). I think the Goblin men in this poem are in fact men that make promises to young girls to give them all their love, hence there fruit to get what they want, which is sex. ...read more.

Once Lizzie had sacrificed herself to the Goblins and went home to Laura and let Laura feast upon the Goblins juices that was on her body she became better, her hair came back to its natural colour and she became well again 538-543. It makes you believe that it is the fruits juice that remedies her, but it could well be seen as though it is her sister's love and affection that makes her well. There is no mention about males after the Lizzie and the Goblins inclining that you don't need males to make you whole and to save you. Christina Rossetti shows by a number of ways which I have illustrated in ways in which this poem can be seen as subversive. I think that she did not believe that fallen women should be scorned if they redeem themselves, as god himself still accepts sinners. For Rossetti to even write a poem like this and for it to be popular would be subversive as women writers were not in the literary canon, but by this influential poem and many others she eventually made it into the literary canon under Christina Rossetti, and not Ellen Alleyne. ...read more.