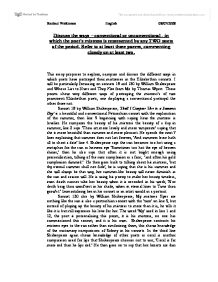 Discuss the ways - conventional or unconventional - in which the poet's mistress is represented by any TWO poets of the period. Refer to at least three poems, commenting closely on at least two.

Discuss the ways - conventional or unconventional - in which the poet's mistress is represented by any TWO poets of the period. Refer to at least three poems, commenting closely on at least two. This essay proposes to explore, compare and discuss the different ways in which poets have portrayed their mistresses in the Elizabethan sonnets. I will be particularly focussing on sonnets 18 and 130 by William Shakespeare and Whoso List to Hunt and They Flee from Me by Thomas Wyatt. These poems show very different ways of portraying the mistress's of two prominent Elizabethan poets, one displaying a conventional portrayal the other three not. Sonnet 18 by William Shakespeare; 'Shall I Compare Thee to a Summers Day' is a beautiful and conventional Petrarchian sonnet with the explanation of the summer, then line 9 beginning with saying how the mistress is lovelier. He compares the beauty of his mistress the beauty of a day in summer; line 2 says 'Thou art more lovely and more temperate' saying that she is more beautiful than summer and more pleasant. He spends the next 7 lines explaining that summer does not last forever, 'And summers lease hath all to short a date' line 4. Shakespeare says the sun becomes too hot using a metaphor for the sun as heavens eye 'Sometimes too hot the eye of heaven shines,' then he also says that often it is not bright enough using personification, talking of the suns complexion as a face; 'and often his gold complexion dimmed.' ...read more.

On the whole Shakespeare is not very complimentary towards his mistress, up until the characteristic Petrarchian turn in line 9, where Shakespeare first mentions his love for his mistress. Although music is more beautiful he loves to listen to her speaking. He does not liken to her to a goddess, 'I grant I never saw a goddess go,' he admits that she is mortal and earthly 'My mistress when she walks treads on the ground.' Shakespeare end s with saying that he believes that his love for his mistress is as strong as any of those poets who falsely compare the beauty of there lovers. 'Whoso List to Hunt' by Thomas Wyatt is again a typical Petrarchian sonnet. Though rather than describing the beauty of his lover Wyatt prefers to write of the loss of his freedom to woo her. The reader presumes the poem is about Wyatt's supposed lover Anne Boleyn who became the second wife of Henry VIII. 'Possibly the poem refers to Anne Boleyn, who was chased by Henry VIII. Wyatt is supposed to have warned the King against her as she was too free with her favours.' (http://www.shakespeares-sonnets.com/Wyatt2.htm#anchor003) Throughout the sonnet Wyatt likens his lover to a deer 'Whoso list to hunt, I know where is an hind.' He explains that anyone can hunt her if they want to but he may not 'But as for me alas, I may no more.' ...read more.

In the third stanza he wants to believe that her flight was a dream but he is wrong. She has left and forgotten him, '...into a strange fashion of forsaking.' The last two lines explain that she treated him so kindly but he will never find out what he could give her in return as he never got the chance; 'But since that I so kindly am served, I would fain know what she deserved.' In each poem the mistress is portrayed in a different way. In the first 'Shall I Compare Thee to a Summers Day by Shakespeare, the mistress is shown in the conventional way; unmatchable charm and exaggerated beauty. In the second My Mistress' Eyes are Nothing Like the Sun Shakespeare does not talk of beauty at all in fact his mistress in not considered beautiful at all, but he loves her just as much as he would had she been Venus herself. In the first of Wyatt's poems covered in my essay the mistress is likened to a deer, free and a bit wild that has been caught and taken from him. The second of Wyatt's and final poem in my essay the mistress is portrayed as a woman so incredible and maybe beautiful that she is capable of having power over man and then leaving him for someone else. Each woman is portrayed in a different way the first conventional the others not so conventional showing four different ways in which Elizabethan poets represented their mistresses in their poetry. ...read more.