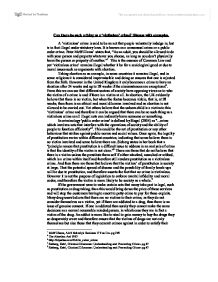 Can there be such a thing as a victimless crime? Discuss with examples.

Can there be such a thing as a 'victimless' crime? Discuss with examples. A 'victimless' crime is said to be an act that people voluntarily indulge in, but is in fact illegal under statutory laws. It is known as a consensual crime or a public order crime. Peter McWilliams' states that, "As an adult, you should be allowed to do with your person and property whatever you choose, as long as you don't physically harm the person or property of another."1 This is the essence of Common Law and yet 'victimless crime' remains illegal whether it be for a sociological good or due to moral issues such as arguments with abortion. Taking abortion as an example, in some countries it remains illegal, and in some religions it is considered impermissible and doing so ensures that one is rejected from the faith. However in the United Kingdom it only becomes a crime to have an abortion after 24 weeks and up to 28 weeks if the circumstances are exceptional2. From this we can see that different sectors of society have opposing views as to who the victim of a crime is and if there is a victim at all. In abortion, the UK evidently believe that there is no victim, but when the foetus becomes viable, that is, at 28 weeks, then there is an ethical and moral dilemma involved and an abortion is not allowed to be carried out. ...read more.

For example, in the case of R v Brown (1994) where a group of sado-masochists engaged in consensual acts of violence against each other for sexual gratification were convicted under the Defences Against the Person Act 18616. Considering violence is acceptable within sporting activities, dangerous exhibitions, surgery and body art, it is classed as unacceptable within a sexual act between consenting adults. This contrasts with the argument outlined in the drug issue that states that if one genuinely consents then there can be no victim. That an addict can't consent but a drug user who is not an addict can consent, still does not make it a victimless crime, as there are still secondary victims such as society as a whole like the taxpayers who must eventually pay the cost of rehabilitating the drug addict and supporting his dependents. The Government's introduction of the smoking ban that came into force on the 1st July 2007 is an indication that legal consensual acts still have victims. One can still smoke in the privacy of their own home, yet they can not smoke in public places where they will put others at risk with their secondary smoke. Yet in a lot of cases, people are not entitled to do a lot of things in the privacy of their own homes, such as drugs and violence, this could possibly go against their freedom of rights, people should have the right to engage in self-harming activities if they wish. ...read more.

the worries about abuse and aids as they will all be monitored securely.9 However, it could also backfire if certain acts were made legal, some problems may disappear, but new problems could surface, and I believe that once an act is legalised it would be impossible to criminalise it once again. In conclusion, I do not believe that there can be no such thing as a victimless crime, especially as there are so many varying perspectives on acts such as abortion and homosexuality that conjure up a victim and therefore the act is seen as a crime. However in criminal law there does not need to be a victim for someone to be convicted. Therefore a crime is a crime regardless of whether there is a victim or not it just makes it a lot harder to convict someone when either no one reports it or there are no witnesses to the crime. I do believe however that the government can justify almost any law by stating that it is for the good of the people, such as the wearing of a seatbelt, it seems to be a means to generate more money for the government. Yet real crimes such as drugs and prostitution do have a hidden victim, and although some people can't see it, it does not mean that the victim is not there. ...read more.