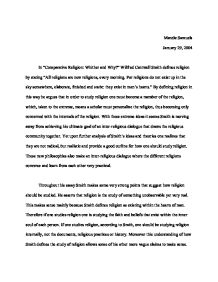 Mandie Samuels January 29, 2004 In "Comparative Religion: Whither and Why?" Wilfred Cantwell Smith defines religion by stating "All religions are new religions, every morning. For religions do not exist up in the sky somewhere, elaborate, finished and static: they exist in men's hearts." By defining religion in this way he argues that in order to study religion one must become a member of the religion, which, taken to the extreme, means a scholar must personalize the religion, thus becoming only concerned with the internals of the religion. With these extreme ideas it seems Smith is moving away from achieving his ultimate goal of an inter-religious dialogue that draws the religious community together. Yet upon further analysis of Smith's ideas and theories one realizes that they are not radical, but realistic and provide a good outline for how one should study religion. These new philosophies also make an inter-religious dialogue where the different religions converse and learn from each other very practical. Throughout his essay Smith makes some very strong points that suggest how religion should be studied. ...read more.

In addition, taken literally, Smith minimizes the importance of studying the external parts such as documents and practices of the believers. By doing this Smith indirectly suggests that past studies of religion are of no use now since the scholars never tried to reach a personalization with the religion. He is also indirectly suggesting that one cannot study extinct religions since one cannot reach the heart of the religion. More importantly if Smith's philosophies are taken to the extreme he is actually moving away from his goal of all religions coming together to have an inter-religious dialogue where each member of each religion discuss and share in the glory of God (Smith, 48). This is mainly because if personalization is stressed too heavily members of each group will be too closed minded to open up to other religions. Furthermore they might not be able to be sensitive to the other people's religions since they are so immersed in their own ideas. Yet more importantly if personalization is taken to the extreme a member or scholar of a certain religion may become only intelligible to a person in that religion and unintelligible to people outside that religion. ...read more.

Since the idea that understanding the heart of religion needs to be accompanied by external facts to purely understand a religion, it would seem more likely for a person to be more open minded about understanding new religions. If the person knew the history of his or her religion he or she may know how the other religion affected his or her religion thus equipping them to better understand the other religion. Moreover since they wouldn't be so deeply involved in their personal religion they could make intelligent statements that outsiders could understand as well as people of their religious faith, which is what Smith says needs to occur in order for an inter-religious dialogue to be bring a community together. At first glance Smith seems radical and unrealistic making such claims that discredit the study of religion all together. At first glance it seems his philosophies are trying to separate the religious community from each other. However like most ideas and philosophies it is necessary to step back and reevaluate again. Once this is done Smith's philosophies become a plausible and realistic methodology for drawing the religious community together. ...read more.