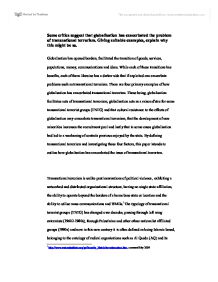 Robb cites a link between globalisation and reduction in state's control, caused by the emergence of stronger non-state actors such as TNTG, combined with a loss of control over "borders, economies, finances, people and communications."43 Resultantly, states can experience a growth in TNTG operating within their states or may find themselves easier prey due to laxity in security measures. While this will affect Non-Integrating states more that Core states, the West may find its own security is affected by the destabilisation of these states, and by attacks on Western infrastructure directed from within these weakened states. Regardless of globalisation's ability to weaken the state, the simple fact remains that by simply existing in a globalised world the actions of states, both at home and abroad, now have far more repercussions for security than before. The states susceptibility to terrorism is determined not just by how it treats its citizens at home but by its actions abroad. When such actions lack international legitimacy and local populations perceive them as unjust, radical groups come to see terrorism as an appropriate response.44 In an interconnected world states actions in countering terror may lead to a greater number of disaffiliated actors who turn to terrorism as a means of reprisal. These acts of violence may lead to a bottom up emaculation of the state as citizens see a state unable to exercise control over TNTG.45 Loss of state's control may also be a top down shift as states lose authority to act as singular entities in an increasingly integrated world of global governance where the actions of states have interconnected repercussions on the economies and social make up of other states. Thus these actions, once permissible as singular acts must now be enacted with the cooperation of other states or with an understanding of spill over. Like-wise some larger states have the ability to coerce other states into actions that may exacerbate terrorism. ...read more.