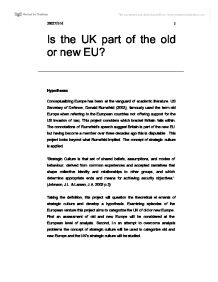 Is Britain part of the old or new EU

Is the UK part of the old or new EU? Hypotheses Conceptualizing Europe has been at the vanguard of academic literature. US Secretary of Defence, Donald Rumsfeld (2003), famously used the term old Europe when referring to the European countries not offering support for the US invasion of Iraq. This project considers which bracket Britain falls within. The connotations of Rumsfeld's speech suggest Britain is part of the new EU but having become a member over three decades ago this is disputable. This project looks beyond what Rumsfeld implied. The concept of strategic culture is applied. 'Strategic Culture is that set of shared beliefs, assumptions, and modes of behaviour, derived from common experiences and accepted narratives that shape collective identity and relationships to other groups, and which determine appropriate ends and means for achieving security objectives.' (Johnson, J.L. & Larsen, J.A. 2002 p.3) Taking the definition, this project will question the theoretical elements of strategic culture and develop a hypothesis. Examining episodes of the European venture this project aims to categorize the UK of old or new Europe. First an assessment of old and new Europe will be considered at the European level of analysis. Second, in an attempt to overcome analysis problems the concept of strategic culture will be used to categorize old and new Europe and the UK's strategic culture will be studied. Drawing a Line The socio-economic benefits that the EU provides need considering. This is a good starting point as the EU is a political entity created by states of old and new and they need to benefit from membership. Ferriera, A. 1978. p.122 Table 1 details trade which provides economic benefits for the member states. Three years after accession the UK is behind France, Germany and Italy in exports. A characteristic of a newer state is that lags behind the big three in receiving the greatest benefits from further enlargement. ...read more.

Importantly, those states were faced with an international arena which differed from that witnessed immediately after WW2 thus a difference in strategic culture can be noted. This has lead different state strategies amongst continental neighbors. After being released from the Soviet stranglehold some Eastern European states are reluctant to re-erect limits on state sovereignty in anyway similar to those they just escaped. Klaus is refusing to fly the EU flag over public buildings 'saying it reminds him of the days when his country was made to fly the Soviet flag' (Cendrowicz, R. Tue, Dec 30th 2008 p.14). So what can be said for the UK sitting aside mainland Europe and arguably even more complex than the Eastern European states? What is British state strategy and in those terms where does Britain belong, in the old or the new Europe? A Clear-cut Understanding Looking at Britain's strategic culture can help identify an identity. It helps to point out what makes Britain tick within Europe and on the international stage. Qualifying old and new Europe does not individually involve the European level of analysis. This project considers how state-centric policy interprets Europe. There is also a further dimension. How Britain's national security policies are shaped to accommodate international relations outside Europe is equally important. British ties to America and historical commitments to the Commonwealth can't go unmentioned. History plays an important role as scholars argue that it has lead to the unique way that states construe their strategic culture. The shared beliefs and common experiences provide a set which the member states relate to. In the aftermath of WW2 achieving political and economic harmony across Europe was necessary. Those states also shared a belief that democratic economies were essential, however contrasting their views were on the specifics. This project will consider to what extent those strategic cultures are interrelated. If a common thread can be identified between the earlier members then old Europe may become an exhaustive, definite list. Determining Strategic Culture Carnes Lord (1985 p.272) ...read more.

1973 p.32). Accepting membership is mandatory as withdrawing from the community is completely unfeasible. Not only would it test most parts of society and the economy, such an action by a government would ironically threaten their holding of office. I believe that the negative affects of withdrawing from the community would outweigh the approval from the anti-European British electorate. Third, the role of the head of state concerns state craft. It is argued that the main role of a head of state is to maintain diplomatic relations with other nations. The EU provides a suitable forum to do so and transaction costs are significantly reduced. Blair showed more consistency in office than his predecessors thorough his commitment to European relations 'Thatcher by the end was barely on speaking terms with most of her counterparts. Major was the object of pity and scorn. Blair has learned the lesson and made friends' (Stephens, P. 2001 p.70). Blair realised that the political forum should be approached diplomatically and this helped him take a consistent stance and still keep the electorate on his side. This is a further reason why a government would not reject the community upon taking office. Conclusion Departing from Rumsfeld's depiction was required to fully assess the concept of old and new Europe. Identifying leadership suggested that the UK would be part of old Europe but such an understanding was ambiguous. Political circumstances left Britain out of the loop in comparison to France, Germany and Italy. Post-Thatcher and during Blair's premiership a change can be noted but the modernity of that change may place the UK in new Europe. This would have to be weighed against the political might that Britain has within the Council. Examining strategic culture meant a valid assessment of the categories could be made. The conclusion reached argued that British government is of old Europe. The nature of EU law and policy means that the rest of Britain should follow suit and belong to old Europe. However, certain parts of society challenge the concept of European integration and feel that they are still part of a sovereign UK. ...read more.