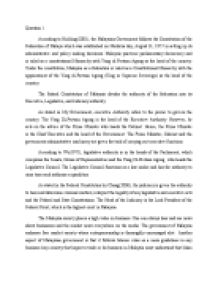 Malaysian Constitution and the Government's use of trade barriers.

﻿Question 1 According to Hickling(2001), the Malaysian Government follows the Constitution of the Federation of Malaya which was established on Merdeka day, August 31, 1957 in setting up its administrative and policy making decisions. Malaysia practices parliamentary democracy and is ruled as a constitutional Monarchy with Yang di Pertuan Agong as the head of the country. Under the constitution, Malaysia as a federation is ruled as a Constitutional Monarchy with the appointment of the Yang di-Pertuan Agong (King or Supreme Sovereign) as the head of the country. The federal Constitution of Malaysia divides the authority of the federation into its Executive, Legislative, and Judiciary authority. As stated in My Government, executive Authority refers to the power to govern the country. The Yang Di-Pertuan Agong is the head of the Executive Authority. However, he acts on the advice of the Prime Minister who heads the Cabinet. Hence, the Prime Minister is the Chief Executive and the head of the Government. The Prime Minister, Cabinet and the government administrative machinery are given the task of carrying out executive functions. ...read more.

A company may want to look into past research of other countries they have tackled with such a dominant religious counterpart in government or do an even more in-depth analysis in general on how to approach the governmental system of the country as a whole. Tackling the Malaysian government poses not only the regular difficulties associated with entering a country but presents an even more complicated issue in the sense that the company must also cooperate with a long Islamic tradition as well. For example, when McDonald?s first came to Malaysia in 1982, they are restricted to sell foods that are branded as ?Halal? by Islamic law. This means that they can?t sell their famous hamburgers which were made of pork meat. Besides that they also have to follow strict food preparation methods as implemented by de current government when preparing food for example, chicken n cows must be slay and killed through the means of cutting the throat only. ...read more.

Since free trade typically results in more profitable trade many of the trade association such as The World Trade Organization and the ASEAN have required a drop in automotive tariffs. According to Asian Trade(2009), they have dropped from 40% to 20% in 2005 and 5% in 2008. Malaysia?s Ministry of International trade and Industry has developed a system of approved permits (AP). These permits allow foreign automobiles to be imported and then distributed. The system of AP acts as a quota by restricting the number of vehicles allowed into Malaysia. The current cap is 10 percent of the market. Malaysia also has strict traffic regulation and noise standards that act as a non-tariff trade barrier, by not allowing foreign vehicles that do not fit the requirements into the country. Malaysia uses an industrial adjustment fund to provide for locally assembled vehicles. Components sourced from locally registered components manufacturing companies are eligible for tax reductions, raising concerns that this fund revives the local content program that had been abolished in 2004. Because of the small-scale operations of many foreign carmakers in Malaysia, they cannot source components locally, thus preventing them from benefiting from this fund. ...read more.