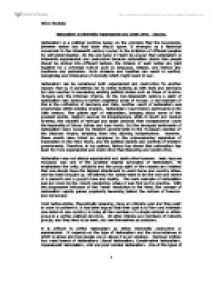 Nationalism is inherently expansionist and destructive. Discuss. Nationalism is a political doctrine based on the principle that the boundaries between nation and that state should agree. It emerged as a historical movement in the nineteenth century rooted in the ambition of different peoples for self-determination. On the one hand it might be argued that nationalism is inherently expansionist and destructive because nationalism states that people should be divided into different nations, the citizens of each nation are joint together by a universal culture such as language, religion, and history and traditions and patriotism. Such divisions and loyalties can result in conflict, xenophobia and intolerance of diversity which might result in war. Nationalism can be considered both expansionist and destructive for another reason; that is, it sometimes led to nation building as with Italy and Germany but also resulted in weakening existing political states such as those of Austria-Hungary and the Ottoman Empire. By the mid-nineteenth century a spirit of nationalism was obvious in before disjointed areas of Europe. A key example of this is the unification of Germany and Italy. Another result of nationalism was divisiveness within existing empires. Nationalism made history particularly in the 19th century, 'the golden age' of nationalism, bringing about some of the greatest events. Belgium secured its independence, while in South and Central America, the colonies of Portugal and Spain declared their independence under the leadership of Simon Bolivar and Jose Martin. But the strongest sentiments of nationalism were roused by Western governments in the European colonies of the Ottoman Empire, tempting them into claiming independence. However, these events were trivial as compared to the unprecedented expansion of imperialism in the Third World, and the political clashes and conflicts of Western governments. Therefore, in my opinion, history has shown that nationalism has been far more expansionist and destructive than liberating and constructive. Nationalism was not always expansionist and destructive however. ...read more.

Conservatives view humanity as imperfect, they have pessimist views about human nature, and they also would argue that we are psychological flows that cannot be removed. This leads them to seek order as becoming important and to control the bad side of the human nature. Therefore, one can say that nation provides a solution ton the order by patriotism which is very important to conservative nationalism it is the natural love of their nation that people have about their common culture. People put national loyalties ahead of the rival loyalties such as class loyalties. On the other hand, conservative nationalism can be pro to xenophobia. It has the fear of foreigners because conservative nationalism relies to traditions and is insular conservative nationalism since it is a racial superiority. It is not racialist but latitude racism. Conservative nationalism can be guilty of being racist but not racialist. An example of this is Enoch Powel 'river of blood' speech on immigration which he picked up out of the conservatives. Another example is Mrs Thatcher deputy leader in the 1980s Norman Fowler referring to his cricket test. Where people who come to England should only support England's cricket team referring the West Indies and Pakistanis. This is a racial implication to the on-white people. Conservative nationalism is expansionist and militaristic. Conservative nationalism does not look at war and over sees expansion. They understand that war is a threat to tradition which is one of their bedrocks. Conservative leaders exploit wars to patriotism; they generate e.g. Thatcher in the Falklands war. Nevertheless, the third type of nationalism which is more likely to not support the doctrines of expansion and destruction is anti colonial nationalism. One of the momentous transformations of the post-war World was the final decline and fail of colonial empires. Anti-colonial nationalism began to appear as a significant for that in the Arab World, India and Southeast Asia. ...read more.

An example of this is Lip Heart's theory in the Dutch system. Without this, the majority group will form exclusion and assimilation rather than create genuine liberal value. Liberal nationalism is seen as one of the rational types of liberalism. These ideas are national reasons which lead to international freedom and peace and order rather than anarchy. These are all rational reasons. In addition, liberal nationals are both progressive and reactionary. They look for future belief of national self-determination. A forward looking is in cases when the people of the nation decide their future. As well, liberal nationalism looks to the past. Established nations tend to look to the past e.g. looking at founding myths and Independence Day in the USA and Bestile Day in France .Liberal nationalism does not stress on race and culture which is an exclusive way of defining a nation. Liberal nationalism define itself, it is not the idea that the liberals imagined it is. Liberals ignore the disadvantages of nationalism such as tribalism which is the dark heart of nationalism. An example where this type of nationalism can be exclusive when excluding the groups who do not share to particular values will not be included such as within French nationalism banning the head scarf can be seen as being exclusive and tolerant to Muslims to maintain a state education system and secularisation which is a liberal idea. Finally, liberal nationalism sees it self as left or right, progressive or reactional, rational and irrational and inclusive or exclusive. In conclusion, Nationalism has played an important part in the unification and independence of many nation states. It is an idealistic concept and is able of being an important constructive strength. Unfortunately it seems that nationalism usually entails a darker side. By definition, a doctrine which emphasises the differences rather than the similarities between humans must inevitably lead to rivalry and competition, though not necessarily expansionism and total destruction. I have to disagree with the statement that Nationalism is inherently expansionist and destructive. ?? ?? ?? ?? Hakim Bouhedja 1 ...read more.