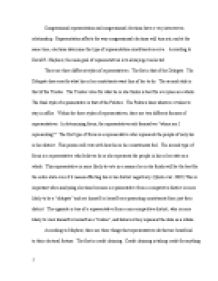 The Relationship Between Congressional Elections and Representation

Congressional elections are not always about how much money a candidate spends to get their name out, or what he or she promises to do in office. It can be as easy as just putting his or her name on the ballot. This is sometimes the case for incumbents. Incumbents are usually the members who see themselves as representing the state as a whole instead of just their district. The percentage of incumbents who are reelected bears this out. Incumbents have had more time in office to achieve particularized benefits for their district. Incumbent reelection rates in the House have increased from 87% between 1946 and 1950, to an astonishing 99% in the 2002-2004 elections. (Jacobson 2012) For this reason, most constituents want to have a more senior member representing their district. More senior members have a higher chance of being the ranking member of some of the more prestigious committees or ?gaining turf,? such as Ways and Means, Rules, or Appropriations committees. Being a ranking member on one of these committees means that the representative has a higher chance of getting a bill passed that affects his or her district in a positive way, and also having a more powerful voice in matters that could affect his or her district in a negative way. ...read more.

It is much easier for constituents to blame one person (the President) than 535 members of the legislative branch. This will determine things such as a unified government, which is where one party controls the House, Senate, and the Presidency, or a divided government, which is any deviation away from unified. When the Presidents party is doing well, or a new President is elected, members of that same party tend to do better in congressional elections. This is called ?riding the President?s coattail.? (Jacobson 2012) Sometimes elected officials use symbolic policies in order to make constituents happy and gain reelection. An example of a symbolic policy would be the Civil Rights Acts that came before 1964. They really did not accomplish anything, because the southerners were being forced to accept them. These acts were in turn not being completely enforced in the South, with loopholes such as the Jim Crow Laws. Symbolic policies are part of what Mayhew says a representative needs to do to stay in office, and that is ?keep doing what you are doing,? and ?take a cautious approach to policy making.? (Mayhew 2004) Representatives do take into account their constituents? opinions, after all, the constituents have the power to take the representative out of office. Representatives will monitor their constituents? opinions through things such as opinion polls. Through these polls, a representative can see what his or her constituents? consider their highest priorities. ...read more.