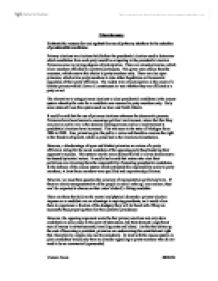 Primaries essay Evaluate the reasons for and against the use of primary elections in the selection of presidential candidates Primary elections are elections held before the presidential election used to determine which candidates from each party would be competing in the presidential election. Primaries come in varying degrees of participation. There are closed primaries, which allow members affiliated to a party to participate. This gives more choice than the caucuses, which reserve this choice to party members only. There are also open primaries, which allow party members to vote either Republican or Democratic regardless of their party affiliation. The widest level of participation is the result of a blanket primary which allows all constituents to vote whether they are affiliated to a party or not. The alternative to using primary elections to elect presidential candidates is the caucus system whereby the vote for a candidate was reserved to party members only. Only some states still use this system such as Iowa and North Dakota. It could be said that the use of primary elections enhances the democratic process. ...read more.

There are those that believe the mental and physical demands a primary election imposes on a candidate are an advantage to aspiring presidents, as it would allow them to experience a fraction of the drudgery they will be faced with if they are successful thus preparing them for their potential presidency. However, the opposing argument would be that primary elections not only drain candidates in some cases to the point of submission, but they demand a significant sum of money in advertisements, travelling costs and labour. As this then drives up the cost of becoming a president, primaries are undermining the constitutional right that, theoretically, anyone can run for presidency. At least with the caucus system in place candidates would only have to consider appealing to party members who do not need to be so commercially persuaded. With turnout generally low in the U.S it would be logical to believe that the use of primaries would promote political involvement. To the contrary, recent studies have found that the abundance of voter requirement in the U.S such as Presidential elections, Congressional elections, state governor, state legislator, state judge and local security officer elections and so on, have provoked a greater apathy in voters. ...read more.

Therefore, events like 'Super Tuesday' do advance and so legitimise the political process in that they attempt to combat voter apathy and redress certain disproportional features of the primary system. Primary Elections are caused by the public need for the devolution of political participation, which is more so prominent in America, a country proud of its constitutional requirement for the decentralization and separation of power. Whether Primaries fulfil this aim is debatable. If the argument for primaries says that they are a demonstration of democracy we must also recognise that they are restrictive in both open and closed form. Only blanket primaries offer choice to all citizens. So if the argument for primaries is that they give choice to more people then only blanket primaries can accomplish this principle. The consequences of Primary elections vary. In some states such as Michigan election results saw a rise in turnout from 1996 to 2000 due to the use of primaries. It would appear that this is a positive consequence. However, the basic principle behind the 'American Dream' is that anyone can make a success of himself or herself if they are willing to strive for their goal, and the consequences of primary elections do support the implications that undermine that constitutional liberty. Victoria Neale 08/03/03 ...read more.