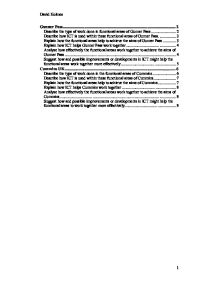 Adrian is currently running Gunner Pass with no other employees. So he does not need to use ICT to communicate between departments

Old customers often come back after their test to thank him. Adrian is getting the right amount of people suitable for his business. Before he opened, he calculated the approximate number of customers he would be able to deal with. He is currently working with enough customers to get enough profit to support himself and his family. If he has too many customers to deal with, he may have to employ another instructor and vehicle. Suggest how and possible improvements or developments in ICT might help the functional areas work together more effectively Any major developments in ICT would have to be a significant one for Adrian's role to change. For example, in the future driving simulators could be used, and the job of driving instructors may not be along for much longer. This is unlikely to happen in the immediate future. So this not at all worries Adrian. But some developments may force Adrian to make changes to his business, if the government decide to change the rules for new drivers, such as new drivers must learn their lessons and take their test in their own car. This in many ways could be a disadvantage for Adrian, because he would have to adapt to his pupil's car, and also he would have no control over it. In his current car he has a clutch and a brake pedal for safety measures when his customers are taking their lessons. Also he wouldn't be able to advertise his business through his car, because he has a top box on his current car, which is a source of advertising for him. He also has various stickers on his car to help his advertising. An advantage of him having to teach in his customer's cars would be that, he could choose any car he liked for his personal and family use. The insurance on his own car would not be as high as the insurance on his current vehicle. ...read more.