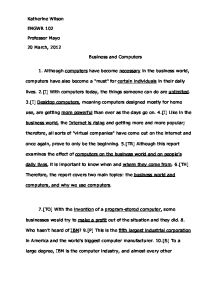 Business and Computers. this report examines the effect of computers on the business world and on peoples daily lives

7.[TO] With the invention of a program-stored computer, some businesses would try to make a profit out of the situation and they did. 8. Who hasn't heard of IBM? 9.[P] This is the fifth largest industrial corporation in America and the world's biggest computer manufacturer. 10.[S] To a large degree, IBM is the computer industry, and almost every other computer company in the world swims in its ocean. 11.[SS] IBM commands about 40 percent of the international computer market, producing approximately three fourths of all medium and large-size computers and one fourth of all personal computers. 12.[SSS] With the invention of "intelligent" computers, IBM was about to enter an era of success that has not stopped since. 13.[P] This is not a secret that businesses now depend on computers, as well as any large organization that wants to keep their "edge" in today's world has to have a computer system. 14.[S] Businesses usually keep a list of all their employees and clients on huge databases, every report, note, memo or anything else that is of importance is stored on computers. 15.[SS] Governments use very expansive IBM mainframes to keep extraordinary databases of all the population.

16.[TO] Schools and Hospitals are other examples of organizations that depend on computers. 17.[P]Businesses depend so much on computers, which makes some things hard to think how they were doing anything before the invention of computers. 18.[S] Of course, with the use of computers, Business can be much larger and expand at an incredible rate. 20.[SS] The amount of money spent each year by companies on new systems and maintenance of old ones is incredible; however, companies just can't afford a major "crash" of all their computers, so they do everything that is possible to assure that they are working properly. 21.[P] Computers are a "must" to stay competitive in today's world. 22.[S] With the amount of application a computer is capable of, a non-computerized business cannotcompete with a computerized one. 23.[SS] Computers help the relation between the business and its clients. 24.[SSS] With a database application, a company can keep track of each of their clients, know which client buys what, know which client buys more, and the list goes on.  25.[P] The rise of the Internet makes the opportunities to company’s endless, thus allowing a company to use the Internet to display information about its goods and services, as where other companies take it one step further and sell its goods and services directly off the internet. 26.[S] Customers can give feedback about a service that he tried or a good that he bought by sending an e-mail to the company he bought it from. 27.[SS] Therefore, the Internet is not only a way for business to increase their profits, but is a way for the client to be heard so that companies can adjust to these comments. 28.[TR] As a result, computers help businesses increase their productivity, but also improves the relationship between the business and its client.

29.[TO] The Internet is rising at an incredible rate, and one thing is for sure, businesses don't want to be left out and they are really starting to realize what opportunities this new communication method brings to them.   30.[P] One of the biggest advantages the internet brings to industries is advertising. 31.[S] With the Internet, companies can inform their clients about new products coming out, new innovations that this company is thinking of, and what the company wants. 32.[SS] Another big advantage that companies have on the net is "e-commerce", which means transaction with clients on the internet. 33.[SSS] Think of how much the company saves by selling goods on the internet, and having the product leave straight from a warehouse to the client's location. 34.[P] As mentioned before, computers have become necessary for a business to survive in today’s business world. 35.[S] A starting business cannot omit computers because if it really wants to succeed they not only have to be computerized, but would also have to be on the Internet as soon as possible. 36.[SS] Businesses really need computers to stay competitive because of the high standards. 37.[TR] Not only is the Internet an excellent tool for a company advertisement, but it's also a new way for the company to transact directly with the client.

38.[CP] As for computers at home, they are not necessary, but are a great tool for anyone who enjoys doing work at home or maybe is in search of a hobby. 39.[CP] The advantages of owning a computer at home is evidently the number of things you can do with the computer, but there is the cost that comes with all these advantages. 40.[CP] Therefore, an individual that wants to invest in a computer should know that it will cost him or her, and that this computer will eventually become obsolete.