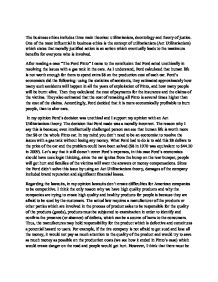 Business ethics - After reading a case The Ford Pinto I came to the conclusion that Ford acted unethically in resolving the issues with a gas tank in the cars.

The business ethics includes three main theories: utilitarianism, deontology and theory of justice. One of the most influential in business ethics is the concept of utilitarianism (Act Utilitarianism) which states that morally justified action is an action which eventually leads to the maximum benefits for everyone who is involved. After reading a case "The Ford Pinto" I came to the conclusion that Ford acted unethically in resolving the issues with a gas tank in the cars. As I understand, Ford calculated that human life is not worth enough for them to spend extra $8 on the production cost of each car. Ford's economists did the following: using the statistics of accidents, they estimated approximately how many such accidents will happen in all the years of exploitation of Pinto, and how many people will be burnt alive. ...read more.

What Ford had to do is to add this $8 dollars to the price of the car and the problem could have been solved ($8 in 1970 was equivalent to $44.20 in 2009). Let's say that it still doesn't cover Ford's expenses, in this case Ford's economists should have uses logic thinking, since the car ignites from the bump on the rear bumper, people will get hurt and families of the victims will want the answers or money compensations. Since the Ford didn't solve this issue by using an Act Utilitarianism theory, damages of the company included brand reputation and significant financial losses. Regarding the lawsuits, in my opinion lawsuits don't create difficulties for American companies to be competitive. I think the only reason why we have high quality products and why the companies are trying to create high quality and healthy products for people is because they are afraid to be sued by the customers. ...read more.

which would create danger on the road and people would get hurt. However, I think that there must be limitation of the lawsuits, because we don't want people to start suing big corporations because of silly claims. My personal moral standing would not change because of my involvement in the company which was involved in wrong doing towards its customers. The reason why I have chosen Act Utilitarianism theory as a support of my opinion in the Ford's case is because; this theory supports my understanding of how that situation should have been solved. Regarding the company that is partially owned by governments, it would also be unethical to choose financial data over human life. Shaw, William H., and Vincent Barry, Moral Issues in Business, 11th edition, Wadsworth Publishing Co., 2010. Goodden, R., Total Quality Management: Quality of Products. 2001, Vol. 12 Issue 5, p623-628, 6p http://www.measuringworth.com/ppowerus/result.php http://topics.law.cornell.edu/wex/Products_liability ...read more.