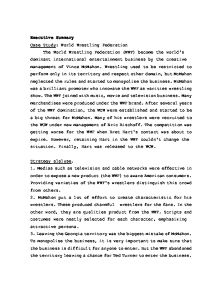 Executive Summary Case Study: World Wrestling Federation The World Wrestling Federation (WWF) become the world's dominant international entertainment business by the creative management of Vince McMahon. Wrestling used to be restricted to perform only in its territory and respect other domain, but McMahon neglected the rules and started to monopolise the business. McMahon was a brilliant promoter who innovate the WWF as varities wrestling show. The WWF joined with music, movie and television business. Many merchandises were produced under the WWF brand. After several years of the WWF domination, the WCW were established and started to be a big threat for McMahon. Many of his wrestlers were recruited to the WCW under new management of Eric Bischoff. The competition was getting worse for the WWF when Bret Hart's contact was about to expire. However, retaining Hart in the WWF couldn't change the situation. Finally, Hart was released to the WCW. Strategy alalyse. 1. Medias such as television and cable networks were effective in order to expose a new product (the WWF) to aware American consumers. Providing varieties of the WWF's wrestlers distinguish this crowd from others. 2. McMahon put a lot of effort to create characteristic for his wrestlers. These produced charmful wrestlers for the fans. In the other word, they are qualities product from the WWF. Scripts and costumes were neatly selected for each character, emphasizing attractive persona. 3. Leaving the Georgia territory was the biggest mistake of McMahon. To monopolise the business, it is very important to make sure that the business is difficult for anyone to enter. But the WWF abondoned the territory leaving a chance for Ted Turner to enter the business. 1. Introduction 1.1 Background of Wrestling World Wrestling Federation (WWF) is one of the most well known association in the world, especially, among men and boys. Many people may misunderstand that it is a gentlemen fighting club as well as other ones such as WBA, WBF or K-1. ...read more.

McMahon expose wrestlers in his camp variously in other entermaint business such as movies and music. On the other hands, celebrities in these business were brought to present in the WWF's matches opening. The WWF matches provided more exciting shows than others: started with the rock concert, explosions, elevated platforms and breathtaking matches that everyone waiting for. Many wrestlers in the WWF becomes rock stars or movie stars. Hulk Hogan was a famous one and the recent one is "the Rock" who has several movies in Hollywood. Sometimes, the wrestlers were invited to present in talk shows, telling fans about their private life. This marketing strategy is to repeatedly shows the product (the WWF wrestlers) to consumers, generating familarity and increase visibility of product which increase purchasing possibility, in the other words, viewers become the WWF fans. 2.2 How big a threat was Turner Broadcasting's entry to the business? Ted Turner are completely different from any other competitors McMahon ever fights with. In the past, McMahon could defeat his opponents easily because there are not a real businessman. Ted Turner, on the other hand, has television station, news networks, sport franchises and cable empire. Precisely, Turner seems to already have had everything he need for competing with McMahon. TBS was a endless financial resource for the WCW to compete with the WWF. Despite the WCW had lost for the first 5 years, McMahon couldn't neautralise this threat because of its enomouse capital reserves from TBS. Unlike the defeated promoters, Turner was an exceptional businessman, experienced and had vision. Importantly, as can be seen from McMahon's strategies, television was a major key factor leading the WWF to the top chart of the American entertainment. Analysing three factors that supported McMahon to succeed the former competition, Turner has none of them. Instead, at this point, Turner was on the side to take advantage over those factors against McMahon's the WWF. ...read more.

The WWF could not offer a better deal to its wrestlers, as a result, superstars gradually desert to the WCW. This might show a vision in Human Resource Management of Ted Turner to properly choose a leader for his business. 3.2 Contract with Bret Hart Contract with Bret Hart was extremely important for the WWF at that time, however, the condition seemed to be financially underestimated. Only 3 out of 20 years in the contract for Hart to wrestler in the ring was not proportional. After the tenth year out of the ring, Hart would hardly affect fans. Soon or later, this contract would cause financial conflict between Hart and McMahon. McMahon also changed Hart's character after signing the contract just because of gaining in popularity of Steve Austin. A hero like Hart were forced to be a villain so that Austin can replace McMahon was not a safe plan. Hart was not necessary to be a villain, the WWF can have hero more than one. McMahon could form team Hart and Austin together, creating double popularity. Hart's fans were remained, while a number of fans are increasing by Austin's popularity. But what McMahon did was decreasing Hart's fans and increasing Austin's fans, the number of fans might end up at the same number. 3.3 Release Hart to the WCW This situation affect the WWF's wrestlers in no small way. Morale of the wrestlers might decrease, doubting that the WWF could no longer compete with the WCW. Then, after their contract expires, the first thing they might consider would be joining the WCW rather than the WWF. Referrences Keegan W., 2002, Global Marketing Management, Prentice Hall, New Jersey Mahoney D., Trigg M., Griffin R. and Pustay M., 2001, International Business: A Managerial Perspective, Prentice Hall, New Jersey Solomon R. and Stuart E, 2000, Marketing Real People Real Choices, Prentice Hall, New Jersey Thompson, A.A.Jr. and Strickland A.J., 2003, Strategic Management: Concepts and Cases, McGraw-Hill Wood, J.M., 1998, Organisational behaviour, John Wiley & Sons, Singapore ...read more.