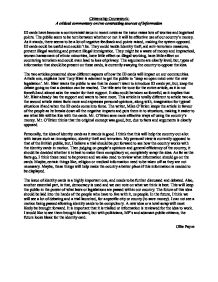 Citizenship Coursework: A critical commentary on two contrasting sources of information ID cards have become a controversial issue in recent news as the issue raises lots of worries and logistical points. The public seem to be torn between whether or not it will be effective use of our country's money. As it stands, there seems to be a lot of negative feedback and points raised, making the system opposed. ID cards could be useful and couldn't be. They could tackle Identity theft, aid anti-terrorism measures, prevent illegal working and prevent illegal immigration. They might be a waste of money and impractical, worsen harassment of ethnic minorities, have little effect on illegal working, have little effect on countering terrorism and could even lead to loss of privacy. ...read more.

This article is totally different to article two as, the second article states facts more and expresses personal opinions, along with, imagination for typical situations if and when the ID cards come into force. The writer, Mike O'Brien keeps the article in favour of the people as he breaks down all the negative impacts and puts them in to situations, making it easier to see what life will be like with the cards. Mr. O'Brien sees more effective ways of using the country's money. Mr. O'Brien thinks that the original concept was good, but, due to facts and arguments is clearly opposed. Personally, the idea of identity cards as it stands is good. I think that this will help the country out a lot with issues such as: immigration, identity theft and terrorism. ...read more.

This will keep the public in the power of what laws or legislations are passed within our country. The future of this idea should be laid into the hands of the people who have to live with it, us people. In the future, I think we will see a lot of debating and a trial launched, for a specific city or county (to save money). I can not see a motion being passed allowing identity cards to be compulsory. A new idea or a total scrap will most likely be brought forward. It is important that it is trialled or information is reviewed for the idea to work. I would like to see them brought forward, but with politicians, MP's and adamant public citizens, the future looks bleak for the identity card. Ollie Payne ?? ?? ?? ?? ...read more.