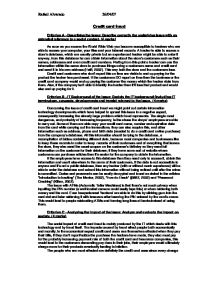 Credit card fraud Criterion A - Describing the Issue: Describe correctly the underlying issue with an extended reference to a social context. (4 marks) As soon as you access the World Wide Web you become susceptible to hackers who are able to access your computer, your files and your internet records. A hacker is able to access a store's database, which are usually private but an experienced hacker might be able to enter it anyway, from this database he can obtain information about the store's customers such as their names, addresses and even credit card numbers. Parting from this point a hacker can use the information within the same store to purchase things using a customers name and credit card and send it to his own address (Helft, 2002). This way both the store and the customers lose. Credit card customers who don't report this on time are viable to end up paying for the product the hacker has purchased. ...read more.

If the employees have access to this database then they need only to access it, obtain the information and use it elsewhere in the name of their customers, if the data is not accessible to anyone and it's not a public database, then any hacker (with or without much experience) will be able to enter the database and extract this information without being noticed until after the crime is committed. Codes and passwords can be easily decrypted and found as stated in the articles "Introduction to hacking" (The Mentor, 2002), "How do I hack" (j0662, 2002) and "Password Cracking" (Kitten, 2002). The issue with ATMs (Automatic Teller Machines) is that there's not much privacy when inputting the PIN number (a well located camera could easily tape this) or when retrieving both money and the card. Even inexperienced `hackers' are able to do this by sticking gum into the card slot and later retrieving it with tweezers after learning the PIN entered by the card's owner. ...read more.

(6 marks) People should be able to make their transactions free of peril and harm but this isn't the case in most parts of our country and people usually don't trust ATMs which are in public places, though employees in companies and businesses aren't keen to credit card fraud (as far as I'm concerned) in fear that they'd lose their jobs but it might become a greater issue as jobs are assured and they become accessible to computers. This problem might be solved in different ways: 1. Avoid using a `third party' for credit card transactions and teach customers to do this on their own. 2. Keep the POS machines nearby so the employee doesn't have time to note down any information such as the credit card numbers, expiration date and name on the card. 3. Forbid companies to have and/or distribute customers' information, included credit card numbers. Criterion E - Selecting and Using Sources: Two or more appropriate sources are referenced in this section and cited in the document body. ...read more.