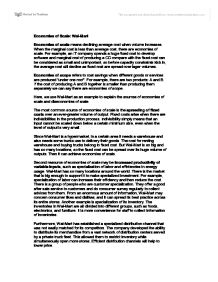 Efficient distribution channels will help to lower price. Economies of scale may also arise when firms carry inventories. Firms carry inventory to minimize the chances of running out of stock. Of course, there are costs to carrying inventory and the inventory costs will drive up the average costs of good sold. Wal-Mart's inventory control system is legendary. It does not want to hold inventory, it does not want backorders. It always orders fewer cases but more frequently. Like many huge companies, Wal-Mart will not wait. It requires shorter lead times and implements "zero tolerance" policies. And this measure can help Wal-Mart save a lot of money on inventory. The fourth resource of economies of scale and scope is purchasing. Most people have purchased items in bulk. They may find sometime price falls as the amount they purchase increases. Big companies that make large purchases from their suppliers may also obtain discounts, enabling them to enjoy a cost advantage over smaller rivals. Likewise, companies with low costs can price their products at the same level as competitors, but make a higher profit while doing so. ...read more.

When Wal-Mart starts its business in a new area, they need to do some research to find out the culture of the society and habits of local people. For example, the hypermarket in China is better to offer the infrastructure carrying traffic to their locations. And in Japan the placement of hypermarkets in malls which include entertainment venues will be more attractive to customers. What's more, they also need to find out the surrounding of its placement. For example, if access by pubic transportation is limited, then the availability of parking is necessary. This kind research will help Wal-Mart take advantage of economies of scale. Firms understand that there are limitations to economies of scale, so that beyond a certain size, bigger is no longer better and may even be worse. Diseconomies of scale may arise for number of reasons. Sometimes it's because the labor costs is too high, the spreading of specialized resources is too thin and bureaucracy. The diseconomies of scale for Wal-Mart maybe is that its pressure on competitors, its impact on communities, its treatment of employees and its dealing with suppliers, to varying degrees, generated badwill for the company. There are even books, films, and occasional conferences devoted to degrading Wal-Mart. ...read more.