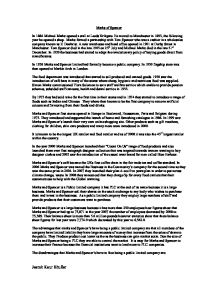 History of Marks and Spencer

Marks of Spencer In 1884 Michael Marks opened a stall at Leeds Krikgate. He moved to Manchester in 1893, the following year he opened a shop. Marks formed a partnership with Tom Spencer who was a cashier in a wholesales company known as IJ Dewhrist. A new warehouse and head office opened in 1901 at Derby Street in Manchester. Tom Spencer died in the late 1905 on 25th July and Michael Marks died in the late 31st December. In 1920 the business had started to adopt the revolutionary policy of buying goods direct from manufactures. In 1926 Marks and Spencer limited had formally become a public company. In 1930 flagship store was then opened at Marble Arch in London. The food department was introduced that started to sell produced and canned goods. 1930 saw the introduction of caf� bars in many of the stores where cheap, hygienic and nutritious food was supplied. Simon Marks commissioned Flora Solomon to set a staff welfare service which enable to provide pension schemes, subsided staff canteens, health and dental service in 1933. ...read more.

In 2008 they announced that they charge 5p for every food carriers that their customers use to help with the Global warming. Marks and Spencer is a Public limited company it has PLC at the end of its name because it is a large business. Marks and Spencer sell their shares on the stock exchange to any body who wishes to purchase them and invest in the business. As a public limited company they employ large numbers of staff and provide products that their customers want to purchase. Marks and Spencer is a large business because it has more than 250 employees how figures show that Marks and Spencer had up to 75,871 in the year 2007 the number of employees decreased by 2008 to 75,389. Their balance sheet is more than 5.6 million pounds however statistics show that there balance sheet figures for last year were 7,774.0 which decreased by this year to 6,562.0. The advantages that marks and Spencer's have being a public limited company are that all members of the company have limited liability they have large amounts of money that increase from the sales of share to the public. ...read more.

The disadvantages of being a PLC are that the company is legally to publish their accounts every year as well as all of this being a PLC it is very hard for them to set up a business as it is a lot more expensive and they have a lot more paperwork to do. Other objectives that Marks and Spencer can set are increasing the shares of the business. Marks and Spencer is part of the private sector, it is owned individually or with several of its shareholders within PLC. Marks and Spencer can be a small business with a single owner or it can be a multinational company. As a private sector Marks and Spencer aim to make profit by which they do not wish to be controlled by the state. The advantages of being within a private sector are profit and ability is determined they have access to the financial resources they have the advantage to respond to demands in difficult situations. The disadvantage of being within a private sector they can only invest when they are return in assure they have flexibility to those that are supermarkets ?? ?? ?? ?? Jasmit Kaur Bhullar ...read more.