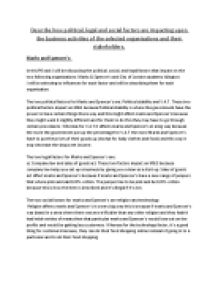 I will be discussing the political, social, and legal factors that impact on the two following organisations: Marks &amp; Spencers and City of London academy Islington

﻿Describe how political, legal and social factors are impacting upon the business activities of the selected organisations and their stakeholders. Marks and Spencer?s: In this P6 task I will be discussing the political, social, and legal factors that impact on the two following organisations: Marks & Spencer?s and City of London academy Islington. I will be selecting to influences for each factor and will be describing them for each organisation. The two political factors for Marks and Spencer?s are: Political stability and V.A.T. These two political factors impact on M&S because Political stability is where the government have the power to have certain things there way and this might affect marks and Spencer?s because they might want it slightly different and for them to do this they may have to go through certain procedures. Whereas for V.A.T it affects marks and Spencer?s in a big way because the more the government put up the percentage for V.A.T the more Marks and Spencer?s have to put the prices of their goods up (except for baby clothes and food) ...read more.

The school is a charity and this means the government funds us for our education and the facilities we have in the school, and if the government stopped funding us then the school wouldn?t be able to work out. Infrastructure affects City of London academy Islington because as the school is a new build the way that it is organised may affect certain people that come to the school eg: teachers, this is because there are loads of teachers that come from far distances and this mean they have to come by car and as there is no car park in the school this may affect the teachers journey because have to end up using public transport. The two legal factors for the school are child protection act and employment law. Employment law has a protection over the employers this means that if anything goes wrong then the employment law gets to cover it. ...read more.

Technology is another social factor that I have chosen. Technology in the school has a very big impact as technology has changed over the years since it first come out. In school we now have computers, laptops also things like interactive whiteboards where as 50 years ago no student back in the day would be able to use something like this as it was only chalkboards that where out. Having these interactive whiteboards, computers, and laptops is a very big advantage for students because they can do their work much easier in school. Also another advantage for having computers and laptops in school is that teachers are able to mark student?s works in a much quicker way. Interactive whiteboards is also a good thing for the teachers as they are able to teach the lesson on a big screen and more children are able to get engaged with the lesson. Also another new piece of technology we got is the ipad this is also another way teachers are able to teach the pupils what they need to be taught. ...read more.