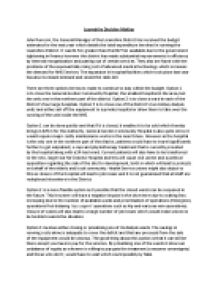 ï»¿Loamshire Decision Making John Runcorn, the General Manager of the Loamshire District has received the budget estimates for the next year which details the total expenditure involved in running the Loamshire District. It was £1.5m greater than the £47.5m available due to the government tightening in finance however the district has made substantial improvements in efficiency by internal reorganisation and putting out of certain services. They also are faced with the problems of the exponentially rising cost of advanced medical technology which increases the demand for NHS Services. The expansion in hospital facilities which took place last year has also increased demand and raised the rates bill. There are three options he has to make to continue to stay within the budget. Option 1 is to close the General Gordon Community Hospital, the smallest hospital in the area, but the only one in the northern part of the district. Option 2 is to close a ward in each of the District’s four large hospitals. ...read more.

Health Service unions might also object to this as closure of the hospital will lead to job losses and it is not guaranteed that all staff are redeployed elsewhere in the District. Option 2 is a more flexible option as it possible that the closed wards can be reopened in the future. This however will have a negative impact in the short term due to waiting lists increasing due to the number of available wards and prioritisation of operations (Emergency operations first delaying ?less urgent? operations such as hip and varicose vein operations). Closure of wards will also lead to a large number of job losses which would make unions to be hostile towards the situation. Option 3 involves either closing or privatising one of its dialysis wards. The savings in running costs alone is adequate to cover the deficit and that any proceeds from the sale of the equipment would be a bonus. The good thing about this option is that it can still be there except you have to pay for the services. ...read more.

There are still available at other hospitals and centres/clinics in Loamshire therefore should not be the sole reason for objection to this option. In the long term this option is more beneficial as it saves money not only now by in the future years. I didn?t choose option 2 as it has the largest number of potential job cuts than any other scheme which due to this will lead to the union being hostile. It also brings a delay to the treatments for the patients of Loamshire District in the short term. Option 3 was rejected as it actually affects people?s lives and ?you can?t put a price on a person?s life?, the unbalance of equity could potentially lead to more medical complications for those who continue to use the NHS ward. Morally it isn?t right to let one person who is willing to pay for the treatments have it and a person who really needs it, not have it due to high costs which results in a longer waiting time. ...read more.