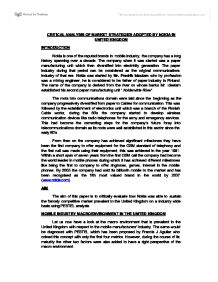 CRITICAL ANALYSIS OF MARKET STRATEGIES ADOPTED BY NOKIA IN UNITED KINGDOM INTRODUCTION Nokia is one of the reputed brands in mobile industry, the company has a long history spanning over a decade. The company when it was started was a paper manufacturing unit which then diversified into electricity generation. The paper industry during that period can be considered as the original communications industry of that era. Nokia was started by Mr. Fredrik Idestam who by profession was a mining engineer, he is considered to be father of paper industry in Finland. The name of the company is derived from the river on whose banks Mr. Idestam established his second paper manufacturing unit 'Nokianvirta River'. The roots into communications domain were laid since the beginning as the company progressively diversified from paper to Cables for communication. This was followed by the establishment of electronics unit which was a branch of the Finnish Cable works, during the 60's the company started to develop wireless communication devices like radio telephones for the army and emergency services. This had become the cementing steps for the company's future foray into telecommunications domain as its roots were well established in this sector since the early 60's. From then on the company has achieved significant milestones they have been the first company to offer equipment for the GSM standard of telephony and the first call was made using their equipment, this was achieved in the year 1991. Within a short span of seven years from the first GSM call the company had become the world leader in mobile phones during which it has achieved different milestones like being the first to company to offer ringtones, games, internet in the mobile phones. ...read more.

This factor would address the issues related to employment laws, quotas, etc., The company is undergoing multiple issues in the legal front as it is battling a patent infringement battle against Apple Inc as a whole the mobile industry is looking forward to the judgement that is expected from this case. The mobile industry since its inception has been a legal battleground with more and more companies filing suits against each other over patent infringements which is creating a stress on the delivery of right products to the customers. However, Nokia as an organisation is fighting multiple legal battles in different locations across the globe. However, it needs to be seen what are the benefits that the organisation is expected to derive from the ongoing legal battles it is fighting in different hemispheres of the world. The major factor would be recoveries it would be able to bring in from this legal suit Nokia is pursuing. PART - B As we have seen how Nokia has been affected from a macro environment perspective. Let us now have a look at the marketing mix strategy that has been adopted by the company with which it has gained the position of being the number one mobile manufacturing company in the world. Marketing Mix Marketing mix is a concept which has been in use since the 60's. Now we will relate how this strategy has been adopted by Nokia Corporation in pursuing the growth of the organisation. Let us have a look at what are the components of the marketing mix and how they influence the organisation. ...read more.

The other concept that is used by Nokia is the Promotion through Product Life Cycle. In this concept the company adopts aggressive marketing campaigns at the entry stage and the offering is sustained during the growth stage also by continuous promotion to ensure brand loyalty is maintained and in the maturity stage of the product the strategist adopts the persuasive model of promotion and finally at the decline stage, new products or enhancement of the old product is released to ensure continuity of demand and sustainability in the market place. Conclusion As can be seen from the above Nokia has undergone and studied the factors that affect the organisation from an external environment these include the PESTEL which are of importance and the last and most important factor would be the understanding about the competitor and provide the products to counter the offerings of the competitor who would be challenging the product offerings in the market place. Hence a continual scan of the above factors and a pulse on the market trends at all times is required to ensure that the company can sustain its growth in the long term. The above strategies elaborate the methodologies adopted by Nokia to have a processed way of assessing the factors that can influence it in the given environment. The marketing strategist is expected to undertake this activity on a periodical basis or at important events like launching of new products this would enable them to have a clear perspective and understanding of the market trends and accordingly the marketing mix can be revised or reconfigured to meet the current demands in the market. ...read more.