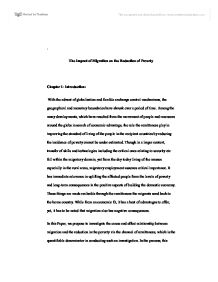 The Impact of Migration on the Reduction of Poverty

. The Impact of Migration on the Reduction of Poverty Chapter I: Introduction: With the advent of globalisation and flexible exchange control mechanisms, the geographical and monetary boundaries have shrunk over a period of time. Among the many developments, which have resulted from the movement of people and resources around the globe in search of economic advantage, the role the remittances play in improving the standard of living of the people in the recipient countries by reducing the incidence of poverty cannot be under estimated. Though in a larger context, transfer of skills and technologies including the critical ones relating to security etc fall within the migratory domain, yet from the day today living of the masses especially in the rural areas, migratory employment assumes critical importance. It has immediate relevance in uplifting the affected people from the levels of poverty and long-term consequences in the positive aspects of building the domestic economy. These things are made realisable through the remittances the migrants send back to the home country. While from an economic fit, it has a host of advantages to offer, yet, it has to be noted that migration also has negative consequences. In this Paper, we propose to investigate the cause and effect relationship between migration and the reduction in the poverty via the channel of remittances, which is the quantifiable denominator in conducting such an investigation. In the process, this Research Study would also identify reliable data sources that throw light on the impact of the remittances of migratory workers on their families, communities and on the overall reduction of poverty in the developing countries. The International Bank for Reconstruction and Development (IBRD) had observed that most of the data available at present is "poor and inconsistent". The problems with counting international migrants and measuring workers' remittances are notoriously difficult. Official estimates are known to contain very large errors in both overstating and understating actual stocks and flows. ...read more.

prevailing exchange rate of 10 Pesos per Dollar. The average household income for the entire sample furnished in Table 2 of 53,465 Pesos ($5,346) works out to an average per-capita income of approximately U.S. $ 1,372 per year. An analysis of the composition of income brings out a significant role the migrant remittances play in the rural Mexico. 13% of household total income and 16% of per-capita income are accounted for from the migrant remittances and the majority of it comes from the U.S.A. Table 2 further brings out the wide regional disparities in the pattern of the remittances. Such variance was so high ranging between 3.6% and a little over 20%, the lowest being reported in the Northwest and the highest coming from Northeast. Put both together, the data in Table 1 and 2 confirms the hypothesis that migrant remittances have significant impacts on mitigating rural poverty subject to the caveat that these impacts are not uniform across the regions, which might have something to do with the historical trends of migration. In order to further validate our research question in the affirmative, we have drawn the results of an empirical study conducted by Edward, J et al (2005) using the data provided by the official statistical agency of the Mexican Government. In this model, the authors use a poverty line defined as the minimum per capita income required to purchase a basic basket of food and non-food items in rural areas. The figures estimated by the Mexican Government of 28.1 Pesos per day accordingly were taken for this purpose. This comprised of 15.4 Pesos for food, 3.5 for basic health and education and 9.8 for clothing, shelter, utilities and transportation. Households which were earning an income lesser than this were considered to be below the poverty line. Table 3 produced below comprises of the data furnishing the proportion of the population living below the poverty line in each region and in all Rural Mexico in the year 2002. ...read more.

It is also unclear as to the extent community support these women receive when the male heads are away from their homeland. In this regard, it is appropriate to mention the concerns expressed by the UNDP in its various reports. Various Human Development Index (HDI) reports during the last two decades have expressed that the emigrating countries had recorded lower HDI vis-�-vis the immigrating countries. The complexity of the influence of migration on the social lives of the people is very difficult to unravel as the manifestation of it has come out in different forms as the outbreak of infectious diseases, mental health problems which all cause a cost on the home country in terms of higher expenditure on health care. This correspondingly increases the non-plan expenditures of the respective governments and to finance it they have to resort to fiscal deficits, which are frowned by the funding agencies. Thus, it has never been possible to assess the true cost-benefit analysis of migration. If on the one hand, migration results in the reduction of poverty but on the other hand, it imposes a burden on the state exchequer in terms of heavy outlays on such welfare programmes. This can become a zero-sum game. It is in this connection it is worth mentioning about the other factors that influence identified by the International Organisation for Migration (IOM). They relate to demographic settings, economic setting, socio-cultural context, political systems and environmental conditions.. Thus, a holistic approach to the multi-dimensional problems posed by migration and associated issues appears to be the need of the hour. Finally, despite the critical role migration plays in providing employment opportunities to its people and brining in remittances which eases the balance of payment of the home countries and provide sources of financing domestic economic development, it is unfortunate that it is not found anywhere in the national agenda as a strategy. This perhaps explains the reason for the dearth of statistics and officially sponsored studies. Even the International Organisations have not taken sufficient note of it. We hope that in the near future such anomalies would be set right. ...read more.