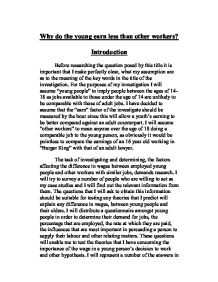 Why Do the Young Earn Less Than Other Workers?

Why do the young earn less than other workers? Introduction Before researching the question posed by this title it is important that I make perfectly clear, what my assumption are as to the meaning of the key words in the title of the investigation. For the purposes of my investigation I will assume "young people" to imply people between the ages of 14-18 as jobs available to those under the age of 14 are unlikely to be comparable with those of adult jobs. I have decided to assume that the "earn" factor of the investigate should be measured by the hour since this will allow a youth's earning to be better compared against an adult counterpart. I will assume "other workers" to mean anyone over the age of 18 doing a comparable job to the young person, as obviously it would be pointless to compare the earnings of an 16 year old working in "Burger King" with that of an adult lawyer. The task of investigating and determining, the factors affecting the difference in wages between employed young people and other workers with similar jobs, demands research. ...read more.

Are young people employed because of a youthful image factor popularised by the firm Finally I will outline my hypothesis as to "why do young people earn less than other workers: Supply factors: 1. The young will accept a lower hourly wage rate because they can afford to i.e. they have lee responsibilities such as families or mortgages 2. The young are paid less because they have less deductions form their wage such as income tax or national insurance 3. Is there an excess supply of young people willing to work which would have the effect of lower wage for young people 4. Is the supply of young workers price inelastic i.e. will workers carry on workers despite a lower wage Demand factors: 1. Firms do not need to pays as much to get young people to work for them 2. Firms have a lower demand for young people because they are often less strong, qualified, skilled or experience than their older counterparts meaning a lower wage rate 3. There is lower demand for young people because they are less flexible in their hours of work 4. Young people offer a lower marginal revenue product than an adult counterpart (M.R.P) hence the demand and wage rate for them is lower ...read more.