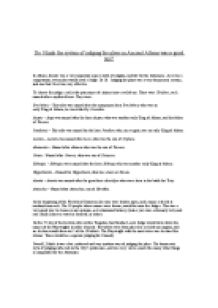 Do I think the system of judging the plays in Ancient Athens was a good one?

﻿Do I think the system of judging the plays in Ancient Athens was a good one? In Athens, theatre was a very important aspect, both of religion, and life for the Athenians. As it was a competition, every play would need a Judge. Or 10. Judging the plays was a very democratic system, and one that I feel was very effective. To choose the judges, each tribe put names of citizens into a sealed urn. ...read more.

On the 5th day of the festival, after all the Tragedies had finished, each Judge would write down the names of the Playwrights in order of merit. The tablets were then placed in a sealed urn (again), and an Archon would draw out 5 of the 10 tablets. The Playwright with the most votes was declared the winner. There would be a separate judging for Comedy. Overall, I think it was a fair, unbiased and very modern way of judging the plays. The democratic style of judging reflected on the City?s politicians, and was very clever, much like many other things accomplished by the Athenians. ...read more.