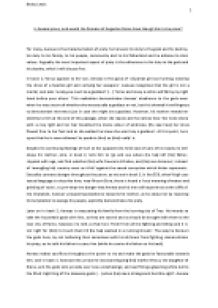 Is Aeneas pious, and would the Romans of Augustan Rome have thought him to be pious?

﻿Becky Lewis Is Aeneas pious, and would the Romans of Augustan Rome have though him to be pious? For many, Aeneas is the characterisation of piety: he honours his duty to the gods and his destiny, his duty to his family, to his people, community and to his fatherland and he adheres to stoic values. Arguably the most important aspect of piety is the adherence to his duty to the gods and his destiny, which I will discuss first. In book 1, Venus appears to her son, Aeneas in the guise of ?a Spartan girl out hunting, wearing the dress of a Spartan girl and carrying her weapons?. Aeneas recognises that the girl is not a mortal, and asks ?surely you must be a goddess? (?) Tell us and many a victim will fall by my right hand before your alters.? This realisation demonstrates Aeneas? obedience to the gods even when he was unsure of whether she was actually a goddess or not, but this showed his willingness to demonstrate reverence just in case she might be a goddess. However, his mother reveals her identity to him at the end of this passage, when she leaves and he notices how ?her neck shone with a rosy light and her hair breathed the divine odour of ambrosia. (He saw how) her dress flowed free to her feet and as she walked he knew she was truly a goddess?. At this point, he is upset that he is never allowed ?to speak to (her) as (she) really? is. Despite his continuing feelings of hurt at her apparent (to him) lack of care of his needs, he still obeys his mother, who, in book 2, tells him to ?go and see where (he has) left (his) father, crippled with age, and find whether (his) wife Creusa is still alive, and (his) son Ascanius?, instead of ?aveng(ing his) ...read more.

In the beginning of book 7, Virgil describes how Aeneas honours Caieta, his nurse, and because of his honour, tribute is paid to her even in Augustus’ time. Virgil writes how Aeneas ‘duly performed the funeral rites and heaped up a barrow for the tomb’. The role of a nurse in Augustus’ Rome was strong; she would effectively become closer to the child than their own mother, which explains why Aeneas honoured Caieta in death more than he honoured his own wife, Creusa. In book 7, Aeneas demonstrates his trust for his son, as he leaves him to defend their landing place at the mouth of the Tiber against the angry Latins, including Turnus, the angry ex-fiancé of Lavinia, who Aeneas took from him, although it was written in the fates, so neither Lavinia nor Aeneas really had any say in it. Regardless of this, Aeneas still trusts his son, who gave Turnus an excuse to start the war, by shooting a pet deer of a local herdsman by arrow, unaware that the deer was favoured. Virgil highlights the father-son relationship throughout his epic poem, especially in book 2, when Creusa tells him in her parting speech ‘do not fail in love for our son’. This reflects the relationship that Augustus had with his adoptive father, Julius Caesar. Augustus promoted the father-son relationship in Roman society, believing that it led to a more stable society if fathers were more involved with their sons. Augustus cared for his adoptive father greatly, and although he was unable to prevent the murder of him in 44 BC, Augustus ensured the exile of the perpetrators- Gaius Cassius Longinus and Marcus Junius Brutus. Augustus also deified Julius in the Lex Titia in 43 BC, which legalised the Second Triumvirate and marked the end of the Roman Republic. Augustus invoked the Lax Papia Poppaea in 9 AD to encourage marriage by making it more economically viable to be married and have children than to not. ...read more.

Aeneas often has to deal with the loss of his men so that he can achieve his destiny; one such victim of Aeneas? fate is Creusa, who dies before they even leave Troy and another is Aeneas? father, Anchises. He does more likely die of old age, although Aeneas still mourns his death. Aeneas must accept that there are casualties that must be endured if he can achieve his destiny. The father-son relationship was one that was influenced by stoic beliefs, as stoics believed that the father figure (pater patria) should always be obeyed as he is wise. At the beginning of the poem, Anchises is the pater patria, however once Anchises dies, Aeneas takes over as the pater patria. Aeneas shows his dedication to his father by symbolically carrying him on his shoulders out of Troy, prioritising him even over his only son. These definitions of piety are interlinked, and cannot exist without the others, however, sometimes we see that to fulfil one part of piety, Aeneas must ignore another, and so the rules of what defines a pious person are clearly not set in stone. Nevertheless, Aeneas is as good as a portrayal of a pious person there is, and he is a reflection of how Augustus wished to be viewed. Thus, we have to ask ourselves, as the Roman audience would have: Aeneas is undoubtedly pious and as pious as one man can, theoretically, be, but is he unachievably pious? And so, does this make him as much of a character of mythology as the monsters he encountered in h**l, and because of this, I feel the important question is not: ?is Aeneas pious?? but is instead, why is he pious? If Aeneas was not pious, and was instead a mimic of Homer?s Odysseus, who is often represented as Aeneas? antithesis, would there be any purpose in Virgil?s poem? No, there would not, and this is why Aeneas is shown as pious, and was believed to be the ideal man by the Romans, a mould for which to cast their own characters in and form themselves by. ...read more.