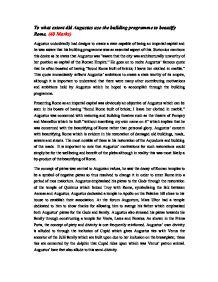 To what extent did Augustus use the building programme to beautify Rome.

To what extent did Augustus use the building programme to beautify Rome. (40 Marks) Augustus undoubtedly had designs to create a state capable of being an imperial capital and he was aware that his building programme was an essential aspect of this. Suetonius mentions this desire as he states that Augustus was "aware that the city was architecturally unworthy of her position as capital of the Roman Empire." He goes on to recite Augustus' famous quote that he often boasted of having "found Rome built of bricks; I leave her clothed in marble." This quote immediately reflects Augustus' ambitions to create a state worthy of its empire, although it is important to understand that there were many other contributing motivations and ambitions held by Augustus which he hoped to accomplish through the building programme. Presenting Rome as an imperial capital was obviously an objective of Augustus which can be seen in his boasts of having "found Rome built of bricks; I leave her clothed in marble." Augustus was concerned with restoring and building theatres such as the theatre of Pompey and Marcellus which he built "without inscribing my own name on it" which implies that he was concerned with the beautifying of Rome rather than personal glory. Augustus' concern with beautifying Rome which is evident in his restoration of damaged old buildings, roads, sewers and streets. ...read more.

The Ara Pacis also highlights Augustus' desire to create piety through the building programme. As shown on the southern frieze, Augustus himself is leading a religious ceremony in which he can be told apart only by his priestly clothes, it is important to note that Augustus blends in with the crowd which contrasts with Hellenistic design and makes Augustus appear as a first citizen rather than an Emperor which highlights how Augustus has used the building programme as a source of propaganda and auctoritas. Augustus interestingly uses the Ara Pacis not only to convey his piety to the gods but also his piety to the family. The south wall reflects Augustus' social legislation and views on the importance of the family in maintaining peace; this is made obvious by the image of Augustus with his family and many surrounding young children. The eastern wall also shows a swan which represents Venus, with the western wall showing Mars Ultor which fully establishes the theme of respect for and worship of the gods. Augustus also wished to achieve a feeling in Rome of peace, unite and prosperity which he shows most clearly not through the closing of the gates of Janus but arguably through the Ara Pacis. The northern frieze shows a group of Senators together in which the notion of peace is subtly displayed through the seemingly casual and informal way in which the Senators converse with one another, some face one direction whilst others turn their back and engage in private conversations, it is a subtly indication of the benefits of peace. ...read more.

Augustus however was able to settle the matter diplomatically in 20BC with ease and such an inclusion clearly reflects Augustus' pride in both himself and the Roman military. The inclusion of the two sphinxes is obviously a clear celebration and indication of his victory in Actium and defeat over Anthony and Cleopatra. The presence of Sol can even be argued to have connections with Rome's military might by emphasising how the sun can now shine after the defeat of Anthony and Cleopatra as well as stressing the unconditional nature of the Roman army, meaning that just as the sun rises each day so does the might of the Roman military. A further subtle reference to Augustus' victory in Egypt is displayed through Tellus who appears to be prospering as a result of Augustus' defeats in both the east and the west. To the left of the figure is a woman with a sword on her scabbard who is largely believed to represent Armenia & Judaea or alternative Spain which were all client kingdoms to Rome; to the right of the figure lies the personification of Gaul which is identifiable by the held dragon trumpet and boar military standard. The inclusion of these two Roman conquests further establishes the idea that Rome is the leading military force on earth and it is clear that Augustus thus wishes to use the building programme as a means of displaying this theme. ...read more.