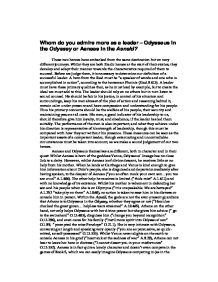 Whom do you admire more as a leader &amp;#150; Odysseus in the Odyssey or Aeneas in the Aeneid?

Whom do you admire more as a leader - Odysseus in the Odyssey or Aeneas in the Aeneid? These two heroes have embarked from the same destination but on very different journeys. Whilst they are both Iliadic heroes at the start of their stories, they develop and adapt their manner towards the characteristics required of them to succeed. Before we judge them, it is necessary to determine our definition of a successful leader. A hero from the Iliad must be "a speaker of words and one who is accomplished in action", according to the horseman Phoinix (Iliad.9.413). A leader must have these primary qualities then, as he must lead by example, but to create the ideal we must add to this. The leader should rely on no others but in turn listen to sound counsel. He should be fair in his justice, in control of his situation and surroundings, keep his men abreast of the plan of action and reasoning behind it, remain calm under pressure and have compassion and understanding for his people. Thus his primary concerns should be the welfare of his people, their security and maintaining peace at all costs. His men, a good indicator of his leadership to us, should therefore give him loyalty, trust, and obedience, if the leader has led them suitably. The performance of the men is also important, and what they achieve under his direction is representative of his strength of leadership, though this must be compared with how they act without his presence. These measures can be seen as the important assets of a competent leader, though extenuating and uncontrollable circumstances must be taken into account, as we make a sound judgement of our two heroes. Aeneas and Odysseus themselves are different, both in character and in their quest. Whilst Aeneas is born of the goddess Venus, Odysseus' lineage has no close link to a deity. ...read more.

Thus the futility of the situation must affect the crew also. The final strain on them is that, apart from the incestuous court of Aeolus and the magical island of Circe, they have little or no contact with civilisation. Instead, they face barbarians like the Cyclopes and Lystraegonians, not the mention the monsters such as Scylla. The crew is indeed hardly the most honourable band of men, but the strain they are under aggravates this. Odysseus' treatment of them hardly inspires them either. He scorns the tears of the men on the shores of Aeaea ("for all the good they did" O.10.204). He considers "lopping off" Eurylochus' head, simply for being afraid of returning to the house of Circe. He doesn't listen to Eurylochus' concerns either, as he reminds the crew of Odysseus' bad decision of staying within the cave of Polyphemus ("this man's reckless folly" O.10.436). He acts more like a schoolteacher than a skipper; never indulging them like Aeneas does with the funeral games in Book 5. He instead seems to spend his time berating them when they have done wrong, even using violence ("dragged them under the benches" O.9.99 , "confronted my men one after the other and rebuked them" O.12.393). The only time that any of them enjoy rest or food, it ends up not working out. The Cicones interrupt the rest on the shores of Ismarus. After their meal in the cave of Polyphemus, Odysseus' waiting for the owner of the cave ends in catastrophe. On Aeaea, it is the men that become frustrated and want to leave, having to remind Odysseus of his 'nostos' (homecoming). Thus, the crew gets no enjoyment in the voyage and any illusion of rest or leisure turns out to be a poisoned chalice. Odysseus does apparently have compassion for his crew ("never had to witness a more pitiable sight" O.12.259) but yet does not shed a tear for the dead on the seas around Thrinacie. His concern is for himself and his accomplishment. ...read more.

The race of Trojans seem to be more proficient without supervision than the Greeks on Odysseus' boat, who seem to need constant watching to make sure they don't break oaths or resort to treachery. Thus, the people themselves may be the reason why Aeneas achieves arguable more impressive feats than Odysseus. Throughout the latter stages of Book 12, Turnus is thrown up as leader whom is the anti-Aeneas. He is isolated from the rest of the battle and keeps himself from even his own side ("Turnus was still in the wood when the bitter news came" A.11.895). He is not compassionate to the dead and dying ("crushing whole columns of men under his chariot wheels" A.12.330). His revelry in death and the way the council of Latinus is against him, especially Drances, emphasises his inability to lead. Whilst he fights selfishly, he is unwilling to fight single combat, revealing a streak of cowardice. The emphasis of the anti-Aeneas can only uplift Aeneas in our eyes. Indeed, it is my considered view that Aeneas is the more impressive leader. Whilst both of the heroes adapt their original profile as a Homeric hero, they do not become the same thing. Odysseus becomes the Odyssean hero, who specialises in tricks ("the whole world talks of my stratagems" O.9.19) and personal survival. However, Aeneas becomes the Virgilian leader, his concern is always for the people and they are the most important thing to him. The reason that the endings of the books are so dissimilar and the Aenied is far less satisfying than the Odyssey is a result of this point. Odysseus' accomplished aim can be viewed within his lifetime, and listened to within a short time. His short-term goal of going to bed with Penelope, and sorting out the situation in his country is all seen within the borders of the story. Aeneas' ending merely means that his journey is at an end but the rest of the story lies with his people. The emphasis is on the people he is leading and not what he individually has accomplished. ?? ?? ?? ?? ...read more.