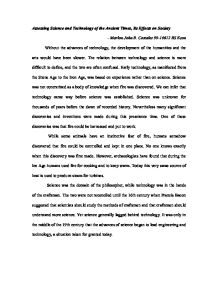 Assessing Science and Technology of the Ancient Times, Its Effects on Society.

Assessing Science and Technology of the Ancient Times, Its Effects on Society - Marlon John B. Costales 99-14612 BS Econ Without the advances of technology, the development of the humanities and the arts would have been slower. The relation between technology and science is more difficult to define, and the two are often confused. Early technology, as manifested from the Stone Age to the Iron Age, was based on experience rather than on science. Science was not concretized as a body of knowledge when fire was discovered. We can infer that technology came way before science was established. Science was unknown for thousands of years before the dawn of recorded history. Nevertheless many significant discoveries and inventions were made during this prescience time. One of these discoveries was that fire could be harnessed and put to work. ...read more.

It has increased the human life span and allowed a healthier life. It has added to leisure time and reduced the long hours of work. Technology can allow the world to feed itself. It has reduced the effects of natural catastrophes such as famines and floods. The world is now a smaller place where people can readily communicate with each other and travel rapidly anywhere. Technology has raised the standard of living, at least in the developed nations, to a point unimaginable only a century ago. Just imagine the life with the people of the ancient times unable to discover certain things that sound so simple in the modern times. A person living in this generation may not care so much about how fire was discovered as he or she is too engrossed with the wonder of microwave technology that substitute the use of fire in various activities. ...read more.

The threat of nuclear war is foremost, though other dangers are also frightening. Shifting balance of power among countries, the territorial aggressions of several states, and the threat of worldwide terrorism have all made the people of the world vulnerable to the detriments of high-powered technology. While people of the ancient times invested so much of their time, effort, and resources in making weapons and horse-drawn chariots, people of today are discovering new viruses to make biological warfare possible. If that happens, the threat would be more difficult to contain for the threat is not visible anymore. This surely leads to an insecure and paranoid world. The effects of dumping poisonous waste and the continued pollution of the atmosphere are but two examples. Although 20th-century technology has created more jobs than have been lost, it still has left many individuals unemployed. The world has become smaller as compared to the ancient times, but social and political institutions have not kept pace as periods change. ...read more.