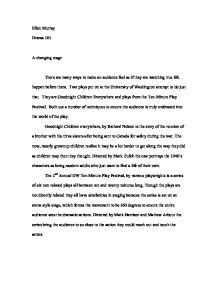 Ellen Murray Drama 101 A changing stage There are many ways to make an audience feel as if they are watching true life happen before them. Two plays put on at the University of Washington attempt to do just that. They are Goodnight Children Everywhere and plays from the Ten-Minute Play Festival. Both use a number of techniques to ensure the audience is truly embraced into the world of the play. Goodnight Children everywhere, by Richard Nelson is the story of the reunion of a brother with his three sisters after being sent to Canada for safety during the war. The now, mostly grownup children realize it may be a lot harder to get along the way they did as children may then they thought. ...read more.

This differs from Goodnight Children Everywhere because it is set on a thrust stage, meaning the stage has seating on three of four sides. The use of an arena stage, in any production forces the actors to sometimes have their backs to the audience because they cannot stage towards on front, like what is traditionally done on a precinium stage. With a thrust stage, it is possible to stage to the front, but would require some extra side attention if the director wanted to keep the actors facing the audience at all times. However, in Goodnight Children everywhere, the director does not try to force the actors front, instead makes the audience feel as if they are watching a real situation, he using a fourth wall blocking concept. ...read more.

While both plays have very strong differences, they are both equally entertaining and creative. Goodnight Children uses its set to enhance the era and the Play Festivle uses its lack of props to stir up creativity and imagination in the audience. In both productions the audience gets a realistic view of life; a life of pain, joy, hope, love, encouragement, and creativity. To compare these two is easy; to say one is better than the other is impossible. Being a member of an audience of any type of live production is an unforgettable experience that has little to do with stages, props, lighting, and etceteras. The true attraction is the passion the characters bring. That cannot ever be compared because every showing is different. Every actor brings something new to the production each time. ...read more.