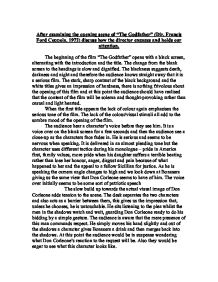 After examining the opening scene of &quot;The Godfather&quot; (Dir. Francis Ford Coppola, 1972) discuss how the director engages and holds our attention.

After examining the opening scene of "The Godfather" (Dir. Francis Ford Coppola, 1972) discuss how the director engages and holds our attention. The beginning of the film "The Godfather" opens with a black screen, alternating with the introduction and the title. The change from the blank screen to the headings is slow and dignified. The blackness suggests death, darkness and night and therefore the audience knows straight away that it is a serious film. The stark, sharp contrast of the black background and the white titles gives an impression of hardness, there is nothing frivolous about the opening of this film and at this point the audience should have realised that the content of the film will be solemn and thought-provoking rather than casual and light hearted. When the first title appears the lack of colour again emphasises the serious tone of the film. The lack of the colour/visual stimuli all add to the sombre mood of the opening of the film. The audience hear a character's voice before they see him. ...read more.

The audience is aware that the mere presence of this man commands respect. He simply moves his hand slightly and out of the shadows a character gives Bonasera a drink and then merges back into the shadows. At this point the audience would be in suspense wondering what Don Corleone's reaction to the request will be. Also they would be eager to see what this character looks like. When the mise-en-scene changes to reveal a view of the Godfather's study the audience's impression would have changed from the opening shot. It is now obvious that this is not simply one character speaking his thoughts aloud. It is not a character in a court scene pleading for a fair trial. It is a Sicilian asking a favour from a powerful fellow Sicilian because the so-called American justice has let him down. The study itself gives the feeling of opulence and the shuttered window and figures hidden in the shadows give the audience an uneasy, threatening feeling. ...read more.

This shows that he does have men who, if instructed, would murder others for him. He grants people wishes because it is his daughter's wedding day, this must mean that he has the power and the means to do these favours for people. Minor actions in this scene also show the power of the Godfather such as a simple flick of the fingers and a drink is brought. When he stands up and moves around the room the men come out of the shadows and follow him, he grants the wishes and he gives the orders. He is calm and in control at all times he listens carefully and, when he feels ready he gives him a reply. He does not raise his voice but he remains in control throughout the scene. Overall, the opening scene to "The Godfather" is very effective because it sets the tone for the rest of the play. We meet the main character who "pulls the strings." It makes the viewer aware that there are two kinds of justice, firstly the American judicial system, which let Bonasera down, and the Mafia system of justice. ...read more.