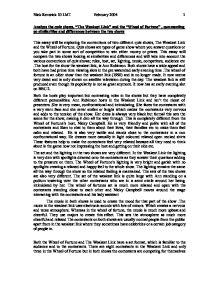 Analyse the quiz shows, "The Weakest Link" and the "Wheel of Fortune" , commenting on similarities and differences between the two shows This essay will be exploring the conventions of two different quiz shows, The Weakest Link and the Wheel of Fortune. Quiz shows are types of game show where you answer questions or you take part in some sort of competition to win either money or prizes. This essay will compare the two shows looking at similarities and differences and will take into account the various conventions of quiz shows; rules, host, set, lighting, music, competitors, audience etc .The host for the show the weakest link, is Ann Robinson. Both shows have a wide appeal and both have had prime time viewing slots in the pre watershed early evening time .The wheel of fortune is an older show than the weakest link (1990) and is no longer made. ...read more.

The Wheel of Fortune's lighting is very bright and garish with no spotlights creating a relaxed and happy feel to the whole show. The lighting remains the same all the way through the show so the relaxed feeling is maintained. The sets of the two shows are also very different. The set of the weakest link is quite large with Ann standing on a podium towering over the other contestants who are in a semi circle around her being intimidated by her. The wheel of fortunes set is much more relaxed and open with the contestants standing close to each other and Nicky Campbell moves around the stage interacting with the contestants and his lady assistant The music in both shows is used to create the mood for that part of the show .The music in the weakest link uses electronic sounds with lots of minors. Which creates a nervous and tense atmosphere. ...read more.

As far as audience is concerned both shows have wide appeal, as almost everyone will enjoy those shows. The wheel of fortune has always had a greater family appeal partly to do with the show format described above and also the big prizes which are much more exciting then money. People usually watch the weakest link to see the fight between Ann and the contestants. People aren't really that bothered about who wins and how much money they make etc. Both the shows bring in people because they like to join in on answering questions, and seeing if they are better than the contestants. You can see that almost all of the aspects of the weakest link are trying to create a nervous tense and dim atmosphere where as the wheel of fortunes aspects are trying to create an easy going happy atmosphere. Overall I think that, that and the contrast between the hosts are the main differences of the two shows and also the main points that bring viewers to watch. ?? ?? ?? ?? 1 Nick Renwick 10 LMT February 2004 ...read more.