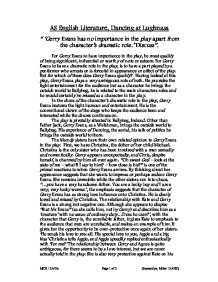 AS English Literature, Dancing at Lughnasa " 'Gerry Evans has no importance in the play apart from the character's dramatic role.' Discuss". For Gerry Evans to have importance in the play, he must qualify of being significant, influential or worthy of note or esteem. For Gerry Evans to have a dramatic role in the play, is to have a part played by a performer who arrests or is forceful in appearance or effect of the play. But for which of these does Gerry Evans qualify? Having looked at this play, Gerry Evans plays a very ambiguous role of both. He provides the light entertainment for the audience but as a character he brings the outside world to Ballybeg, he is related to the main characters roles and he would certainly be missed as a character in the play. ...read more.

"Oh sweet God - look at the state of me - what'll I say to him? - how close is his?" is one of the primal reactions to when Gerry Evans arrives. By thinking about her appearance suggests that she wants to impress or perhaps seduce Gerry Evans. She remains immobile while the other sisters run into chaos. "...you have a very handsome father. You are a lucky boy and I am a very, very lucky woman', the emphasis suggests that the character of Gerry Evans has as strong love influence onto Christina. He is dearly loved and missed by Christina. The relationship with Kate and Gerry Evans is a strong but negative one. Although she appears to despise "that Mr Evans" (as she calls him, not by Gerry) ...read more.

But as a woman, she perhaps exists as a character to prove that even having a man in your life does not make life easier or happier. The most important thing to consider, when trying to solve his importance in the play, is would Gerry Evans be missed in the play if he wasn't there? I consider that he would definitely be missed. Its hard to imagine that the character of Gerry Evans not being there. Would the play be better if the Gerry Evans was replaced with Danny Bradley instead? In stage terms, Gerry Evans is the character the audience does talk about when the curtain comes down and will probably be remembered long after the performance. He does exist for dramatic role in order for the story/the play to at frequent flow and in existence between the relationships and attitudes of the main characters. ?? ?? ?? ?? MCK 12A/En Page 1 of 2 (Jayasuriya, Milan 12ANS) ...read more.