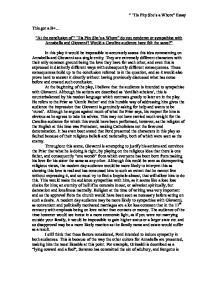 &quot;At the conclusion of &quot; 'Tis Pity She's a w***e&quot; do you condemn or sympathise with Annabella and Giovanni? Would a Caroline audience have felt the same?&quot;

This got a B+... "At the conclusion of " 'Tis Pity She's a w***e" do you condemn or sympathise with Annabella and Giovanni? Would a Caroline audience have felt the same?" In this play it would be impossible to accurately assess this idea commenting on Annabella and Giovanni as a single entity. They are extremely different characters with their only common ground being the love they have for each other, and even this is expressed in distinctly different ways with subsequently different consequences. These consequences build up to the conclusion referred to in the question, and so it would also prove hard to answer it directly without having previously discussed what has come before and created such conclusion. At the beginning of the play, I believe that the audience is intended to sympathise with Giovanni. Although his actions are described as 'devilish atheism', this is counterbalanced by his modest language which contrasts greatly to later on in the play. He refers to the Friar as 'Gentle Father' and this humble way of addressing him gives the audience the impression that Giovanni is genuinely asking for help and wants to be 'cured'. Although he argues against much of what the Friar says, his respect for him is obvious as he agrees to take his advice. This may not have carried much weight for the Caroline audience for which this would have been performed, however, as the religion of the English at this time was Protestant, making Catholicism not the favoured denomination. ...read more.

As it is obvious Donaldo is neither lusty nor youthful, the audience will see that this over-possessive nature has been lying dormant rather than just appearing in this scene, as they may draw parallels with Scene II where he says to Annabella "Love me or kill me, sister". This is because the same all-or-nothing attitude motivates both actions. This jealousy and mistrust continues during Soranzo's attempted wooing of Annabella, where Ford gives Giovanni many 'asides' which go to give the atmosphere of secrecy and suspicion. He is also watching their conversation unseen, giving him a sinister presence on stage denoting underlying but currently dormant violence which is almost prophetic of the end of the play. His mistrust becomes especially evident in the aside "be not all woman", showing that he doesn't entirely believe that she won't jump at the chance of leaving him for one of her suitors despite her vows to him. More undesirable qualities emerge as the play continues, shown when Giovanni discovers Annabella's pregnancy and he claims that he as a "world of business on my head", without showing any regard for the trouble Annabella is in as now there is no way of denying their relationship. He fails to come see her, despite this being the time where she probably would need him the most making this selfishness overpower any sympathetic feelings the audience had for him during the first few scenes. ...read more.

The audience would respond to this by being surprised at the fact that he sees everyone else as merely 'under-shrubs' and would also be especially surprised by the violent tone in the next line: "with me they all shall perish". This would make any repercussions from this violence dismissed as nothing more than his own doing and so from this point forward it would be hard for any audience member to show compassion about the consequences of this distorted self-image. (I know I've missed out a bit here, but I think 4 pages is enough and I don't think I could sit here for another 1/2 hour....) In conclusion, at the beginning of the play sympathy is possible for both characters. Annabella earns more than this during the course of the play, and is likely to be admired by the audiences from both eras, though would probably have been seem as more promiscuous in the time of writing than would be perceived now. Giovanni on the other hand, through use of apocalyptic figurative language shows a too high opinion of himself and is presented as too self-absorbed to induce anything other than contempt. This is accentuated by the death of Annabella being caused by such traits and highlighted by the irony that she had remained to true to him just to die by his hand. " 'Tis Pity She's a w***e" Essay ...read more.