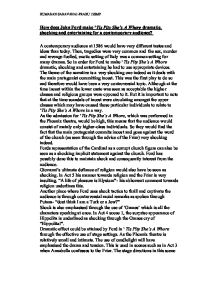 How does John Ford make 'Tis Pity She's A Whore dramatic, shocking and entertaining for a contemporary audience?

How does John Ford make 'Tis Pity She's A Whore dramatic, shocking and entertaining for a contemporary audience? A contemporary audience at 1586 would have very different tastes and ideas than today. Then, tragedies were very common and the sex, murder and revenge fuelled, exotic setting of Italy was a common setting for many dramas. So in order for Ford to make 'Tis Pity She's A Whore dramatic, shocking and entertaining he had to use appropriate devices. The theme of the narrative is a very shocking one indeed as it deals with the main protagonist committing incest. This was the first play to do so and therefore would have been a very controversial topic. Although at the time incest within the lower caste was seen as acceptable the higher classes and religious groups were opposed to it. But it is important to note that at the time scandals of incest were circulating amongst the upper classes which may have caused those particular individuals to relate to 'Tis Pity She's A Whore in a way. ...read more.

Shock is also emphasised through the use of 'Omnes' which is all the characters speaking at once. In Act 4 scene 1, the surprise appearance of Hippolita is underlined as shocking through the Omnes cry of "Hippolita!". Dramatic effect could be attained by Ford in 'Tis Pity She's A Whore through the effective use of stage settings. As the Phoenix theatre is relatively small and intimate. The use of candlelight will have emphasised the drama and tension. This is used in scenes such as in Act 3 when Annabella confesses to the Friar. The stage directions in this scene claim there are 'wax lights' which will create shadows adding intrigue and therefore drama. Drama is also maintained through dialogue. Dramatic rhyming couplets are a common technique used by Ford at important plot points. This can be seen as Annabella plans suicide and ends her soliloquy with the rhyming couplets of 'breath' and 'death'. ...read more.

The slapstick comedy involving him, such as in Act 2 scene 3, will be very entertaining to the audience. The wit and language used will have also be found to be entertaining by the audience. An example is Vasques conscious witty remark "you I think have e'en hit it" with ambiguous definitions. Implicit sexual remarks may also be found amusing and entertaining by the audience such as Bergettos sexual implication of "I have a monstrous swelling". 'Tis Pity She's A Whore has many scenes which contain different events occurring with different characters. This will allow the audience to sustain interest, as they will not be watching the same characters the whole time. This will also maintain a certain degree of suspense as the audience may be eager to wait for the next scene involving particular characters so narrative enigmas can be revealed. Ultimately, John Ford uses a number of useful devices that include stage directions, characters, dialogue and costumes to make 'Tis Pity She's A Whore dramatic, shocking and entertaining for a contemporary audience. KUMARAN SARAVANAI-PRABU 12SMP ...read more.