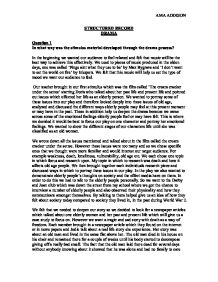 STRUCTURED RECORD DRAMA Question 1 In what way was the stimulus material developed through the drama process? In the beginning we wanted our audience to feel relaxed and felt that music will be the best way to achieve this effectively. We used to pieces of music produced in the olden days, one was called 'Fings aint what they use to be' by Max Bygrave and 'I don't want to set the world on fire' by Inkspots. We felt that this music will help us set the type of mood we want our audience to feel. Our teacher brought in our first stimulus which was the film called 'The cream cracker under the settee' starring Doris who talked about her past life and present life and pointed out issues which effected her life as an elderly person. We wanted to portray some of these issues into our play and therefore looked deeply into these issues of old age, analyzed and discussed the different ways elderly people may feel at this present moment or may have in the past. These in addition help us deepen the drama because we came across some of the emotional feelings elderly people feel or may have felt. This is where we decided it would be best to focus our play on one character and portray her emotional feelings. We wanted to show the different stages of our characters life until she was classified as an old woman. We wrote down all the issues mentioned and talked about in the film called the cream cracker under the settee. However these issues were too many and so we chose specific ones that we thought were more familiar and would interest our target audience. For example weakness, death, loneliness, vulnerability, old age etc. We each chose one topic in which focus and research upon. My topic in which to research was death and how it affects old age people. ...read more.

This was done to show the passing of time from a baby to a teenager. When talking to the audience after the performance some said they felt sympathy for me when I was crying and one even wanted to come and pick me up from the floor. This showed that we succeed in moving the audience emotionally. In the stringed doll dance scene Jodie and I represented the s****l behavior of people in the old age. I showed this by moving in a s****l way when walking towards her and having a big smile on my face to show how happy I am with the s****l satisfaction I was about to receive. This dance was done to bring our character back to the time when she was a teenager. It also showed the different behaviors and attitudes of teenagers. The characters we portrayed were the posh high class people, middle class casual people and the more s****l aroused people. We performed this as a stringed doll dance to show some comic aspects in our play. This is because we wanted our audience to be entertained, make them laugh but also sort of mock them through basically representing their behaviors as a society when our character was a teenager but in a ridiculous way. The next scene was the s*x scene where we show the s****l needs that elderly people wants. Amalia and I conveyed this through the use of our body language by rolling over each other and making o****m sounds which got louder and louder. The rest of the group danced around us repeating the words 'roll it push it' and 'in and out and roll it all around' whilst Amalia and I continued with our s****l dance. The sounds and the words repeated was done to represent the s****l context of that scene show the audience that there was something s****l going on. ...read more.

Our painted faces remind the audience that we are actors and not the character which created some sort of relationship between us because we looked like puppets. Music - I feel the music helped the audience relax a bit as they noticed that was not a 'normal' play. The first music surprised them because it started at a high pitch volume and therefore entertained and put them at ease for a while. Monologue - We said words that would shock and educate the audience which in turn will keep them focused. For example, Joyce said '87 year old stabbed 8 times'. This was short and simple and she was also talking directly to the audience making eye contact. We also wanted them to think and wonder and therefore directed question at them for example, when Anastasia asked the audience to be her friend. Lighting - The lights were directly shown on us to light up the whole stage for the audience to see the performers clearly and keep focused. We used touch to make them feel unsettled by directly shining it onto them at Anastasia scene. This was also done to make them feel lonely during Anastasia's monologue. Acting style - We knew that our acting style will be audience's the main focus and because we could not use much monologue, we used our bodies, voices and gesture to show what we were trying to say. For example at Anastasia scene we wanted to show how lonely she was to make the audience sympathize with her. The rest of us lay on the floor lifeless to show that she was alone and had no one to talk to making her the audience's main focus at that point. Amalia and Katie were holding the touches aiming them at her face for her facial expressions are clearly seen and through this, the audience will develop sympathy for her. The tone of her voice also had her character believable which may move the audience emotionally. ?? ?? ?? ?? AMA ADDISON ...read more.