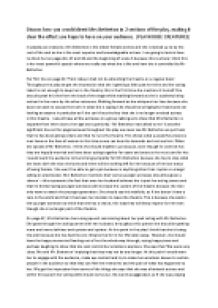 Discuss how you would direct Mrs Betterton in 2 sections of the play, making it clear the effect you hope to have on your audience.

﻿Discuss how you would direct Mrs Betterton in 2 sections of the play, making it clear the effect you hope to have on your audience. (PLAYHOUSE CREATURES) In playhouse creatures, Mrs Betterton is the eldest female actress and she is looked up to by the rest of the cast as she is the most superior and knowledgeable actress. I am going to look at how to direct her on pages 46, 47 and 48 and the beginning of scene 5 because this is where I think this is her most powerful speech where we really see what she is like and how she is controlled by Mr Betterton. Her first line on page 46 ?From today I shall not be attending the theatre on a regular basis?. Throughout the play we get the impression that she is getting a little past her time and her acting talent is not enough to keep her in the theatre; this is the first time she mentions it herself. She should speak this line from the back of the stage whilst walking forward as she is suddenly being noticed in the room by the other actresses. Walking forward as she whispers her lines because she does not want to accept the truth in what she is saying. ...read more.

She goes through her acting career with her husband, throughout this speech she should be getting more and more delirious and quieter and quieter. At this point in the play I think that she is losing the plot because she has had the one thing to live for in her life taken away. However, she should have the happy memories flooding out of her the whole way through, crying happy tears and perhaps laughing to show that she cant control her emotions anymore. She says that ?We were very close. Me and Mr. Betterton? implying that they may not be any longer. At this point I would want her to engage with the audience, make eye contact and try to make her emotions known to certain people in the audience so that they can feel the memories and the pain of what has happened to her. We get the impression from some of the things she says that she was a fantastic actress and within this speech her acting skills should come out, the words exaggerated, as if she was playing to an audience. When she starts to describe her characters she should become quieter yet more animated to make the audience hang on her every word. ...read more.

She should tower of Doll and wait for Dolls answer before she leaves her personal space. This shows the audience that Mrs B has the authority in the theatre when Mr Betterton is not there and although she is a woman, she has a vital role in the theatre! She says that ?I will preceed with precipitation? ? this again should be humorous for the audience and she should really pronounce the ?p?s in precipitation almost as if she is spitting the words out. Then Mrs Betterton proceeds to explain to the rest of the cast about the ?forthcoming season? in the theatre. This is a very important point in the play because she is so powerful over the other actresses. She should be pacing up and down the stage reading from a piece of paper and every sentence looking over to the actresses to check that they are paying attention. However she should read it fast and as if it has been read many times before and that Mrs Betterton is taking advantage of her major superiority a little bit! She finishes with her speech quoting a line from a play ?May the muse attend us?. This should be a dramatic finish and she should exit with a flourish and arm waving. This should be directed at the audience with a cheeky grin to let them know that she is taking advantage of her high place in the cast! ...read more.