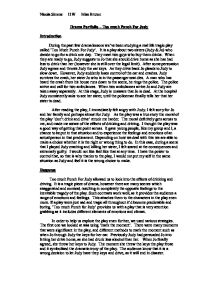 Drama Portfolio - Too much Punch For Judy

Drama Portfolio - Too much Punch For Judy Introduction During the past few drama lessons we've been studying a real life tragic play called 'Too Much Punch For Judy'. It is a play about two sisters (Judy & Jo) who decide to go for a drink one day. They meet two guys who buy them drinks. When they are ready to go, Judy suggests to Jo that she should drive home as she has had less to drink than her (however she is still over the legal limit). After some persuasion Judy agrees and throws Judy the car keys. As they drive back Jo pleads to Judy to slow down. However, Judy suddenly loses control of the car and crashes. Judy survives the crash, her sister Jo who is in the passenger seat dies. A man who has heard the crash from his house runs down to the scene, he rings the police. The police arrive and call for two ambulances. When two ambulances arrive Jo and Judy are taken away separately. At this stage, Judy is unaware that Jo is dead. At the hospital Judy consistently asks to see her sister, until the policeman finally tells her that her sister is dead. After reading the play, I immediately felt angry with Judy. I felt sorry for Jo and her family and perhaps almost for Judy. As the play was a true story the moral of the play 'don't drink and drive' struck me harder. The moral definitely gets across to me, and made me aware of the effects of drinking and driving. I thought the play was a good way of getting that point across. It gave young people, like my group and I, a chance to be put in that situation and to experience the feelings and emotions of an actual person in that predicament. Depending on how we deal with this we are able to make a choice whether it is the right or wrong thing to do. ...read more.

Stop em' thinking n*b - Give it some rabbit (Hops around to and fro on each foot) BOB&n*b -In for the kill and grabbit! (n*b pinches Bob's b******s) (Bob turns around, puts his fist up to n*b, n*b bows his head) (Bob and n*b freeze, looking at Judy and Jo who unfreeze) JUDY&JO - Like two warriors they approach us ... (Stand tall and rigid, then look at each other and giggle.) JO - that ones mine! (Points to Bob) JUDY -"Good Luck to you", I reply, as I hear... (Shake hands with Jo) JUDY&JO -.... Their crappy chat up line. (Howl with laughter) (Whole scene unfreezes) (Walk over to the bar where Jo and Judy are standing brushing down their jackets and trousers adopting clich� poses) BOB&n*b -Hello gorgeous ... and what's a nice girl like doing in a place like this? JUDY&JO - (Walk over to some seats in a corner) Avoiding plonkers like you! n*b- (Look at each other in disbelief) How can they resist us? BOB - With this piece de resistance... BOB&n*b - (walk over to where Judy and Jo are sitting) Hey ... look at you two with your curves ... and us ... with no brakes. JUDY&JO - (Both shake head) Flattery'll get you everywhere. n*b - Just what we hoped (Thumbs up to Bob) BOB&n*b - (Bob sits in the chair next to Jo and n*b next to Judy) Darlin' d'ya Wanna drink? (Bob and n*b put their arms around Jo and Judy's shoulder) JO - Judy. What do you think? (Looks at arm around shoulder) JUDY - I think their plonkers (They laugh hysterically and get up to the bar again) JUDY&JO - (Call Bob and n*b over, suddenly dead serious) But mines a white wine ... JUDY - A bottle of white wine! (Points to the wine behind the bar) JO - EACH! (Links with Judy.) JUDY - No strings attached. (Shakes head) ALL - Drink! (Lifts glass up all together) BOB - Drink! ...read more.

The play would be easy to modify to a contemporary audience; this is because only some elements of the play would need to be changed. This includes music, which would obviously be of some 80's/pre 80's. I'd change it to something like "S Club 7 - Alive". It also includes a change of surrounding; for instance more relevant today places like nightclubs. Examples of these are "The Sky dome", "Jumpkin Jaks" (which are Coventry Nightclubs). As the play is a true story the play will have more of an effect on a young audience. This is because they will feel like the play is more directed at them. It would also prove effective as they are more prone to trying new things and teenagers are increasingly beginning to drink alcohol. As it is a true story a younger audience gets a chance to see the consequences. This may scare them, and make them more aware. Therefore it would be more effective on a younger audience. The use of slides of photographs showing the accident would seem to have a bigger effect on audiences of that era as we have see this effect in theatre many times before and it was something new to them. There are many strategies that would be very useful in exploring the way the play could modernise. Crosscutting could be used to change the play's order, juggling the scene about. This may lead into the use of flashbacks and thought tracking more regularly. Forum theatre would also be worthwhile looking into as we could change the ending to many decisions and choices made by the characters. Maybe this would have an effect on the way the play ended and the consequences faced. Would it be a bad or good ending? I think if maybe a twist were incorporated into the play, it would prove to be successful. For instance everyone thought that Jo was dead, but actually it was Judy. Maybe their face was too damaged to identify them due to the horrific injuries caused by the crash. Nicola Simms 11W Miss Bruton ...read more.