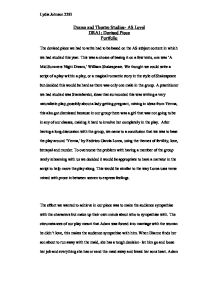 Drama and Theatre Studies- AS Level DRA1: Devised Piece Portfolio The devised piece we had to write had to be based on the AS subject content in which we had studied this year. This was a choice of basing it on a few texts, one was 'A Mid Summers Night Dream,' William Shakespeare. We thought we could write a script of a play within a play, or a magical romantic story in the style of Shakespeare but decided this would be hard as there was only one male in the group. A practitioner we had studied was Stanislavski, ideas that surrounded this was writing a very naturalistic play, possibly about a lady getting pregnant, mixing in ideas from Yerma, this also got dismissed because in our group there was a girl that was not going to be in any of our classes, making it hard to involve her completely in the play. After having a long discussion with the group, we came to a conclusion that we was to base the play around 'Yerma,' by Fedirico Garc�a Lorca, using the themes of fertility, love, betrayal and murder. ...read more.

We wanted to get across the point of how hurtful it would be if it really happened, especially if infertility happened to them or someone they knew, we then wanted to make people understand how wrong it is to treat others differently just because of the way they look or are. I am focusing on acting in the final piece. To create and explore the characters personality we used hot seating as our first technique, we had one person asking questions and one person recording notes for future references, we did this after discussing how our script was going to be like and a rough description of the characters. By hot seating our own characters it gave us a chance to really make our characters personal and input everyone's ideas. I then used the white board to draw the bodies of the characters to then label as a group what everyone should wear. By having a big drawing it made people participate more with drawing on how they think that characters should look. Once we had explored every detail about the characters, we sat down and discussed how the set would look. ...read more.

When staging a script, it is very important to be aware of the health and safety factors to ensure everyone is safe during the performance. The last thing you want is an injured actor! To make sure everything goes well it is vital to be aware of any risks there may be on the set which may cause harm to the cast. -On our set there is a door into the house, when Dianne slams the door she must be careful and always look and make sure no one is unexpectedly behind her before shutting it to avoid trapping anyone's fingers in the door. - Also whist setting up the door, all four brakes must securely be locked thus it wont slide about and potentially cause harm. -Courtney was going to be dressed in heals and a skirt but we decided this was too impractical to be running around in so we changed it to flat shoes and trousers to reduce the risk of falling over. -In case of an emergency the fire exits are labelled in the studio. -When the lights are being positioned, this is always done with the power off. Lydia Johnson 2281 ...read more.